Old school and unnerving. Made for fans of old school horror and those accustomed to the ways of James Wan. 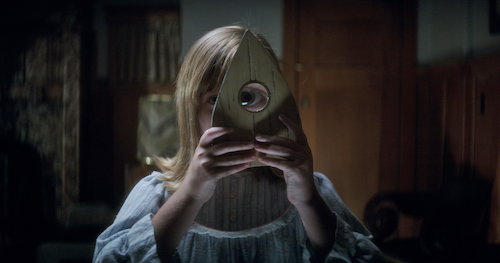 Despite how easy it is for a horror sequel to get the greenlight, it’s still surprising that Ouija got one. Based on the Hasbro board game, the original film was banished to deserved critical purgatory, but that didn’t stop it from earning $103 million worldwide on a $5 million budget. Before you can say sequel, here comes Mike Flanagan’s spectacular prequel frightfest, Ouija: Origin of Evil, to save the franchise no one wanted. Having just watched Flanagan’s terrific woman-in-peril-empowerment Netflix flick Hush over the weekend, I was hoping to be able to forgive him for his terrible cop out of an ending in Oculus. Low and behold, this Ouija is everything the first film wasn’t and in the best of ways, blowing it right out of the water.

Going back to 1967, widow Alice Zander (Elizabeth Reaser) is trying to hold her family together by holding fake seances to provide closure for those dealing with grief. Trying to pay the bills and keep her daughters Paulina (Annalise Basso) and Doris (Lulu Wilson) in line, life is looking bleak. After Paulina sneaks out to a party where she plays with an Ouija board, Alice decides to up her game and brings one home. Soon enough, young Doris is communicating with her deceased father and something much more dangerous. Lucky for them, the girls’ school principal Father Tom (Henry Thomas) decides to take an interest in Doris who missed almost a whole week of school, but not before the house starts to have its way with her, unleashing a powerful entity threatening to kill all of them.

As much as I loved The Conjuring 2, it was far too schizophrenic in its tone compared to the first one. This is the year’s scariest film. No offense to James Wan, but Flanagan takes full advantage of his ’60s setting and runs with it right from the opening Universal logo. Cigarette burns litter the corners of frames; music warbles like we’re watching an old VHS tape; and an Exorcist homage sets up the grand finale we’ve been waiting for.

Flanagan — and co-writer/partner-in-crime Jeff Howard (Oculus, Before I Wake, and their upcoming Stephen King adaptation of Gerald’s Game and an I Know What You Did Last Summer reboot) — takes an old school approach, keeping the suspense running high with little scares sprinkled throughout leading up to the big ones. He’s also made this a far more emotional horror movie than audiences may be used to. You’re either going to love it (à la Poltergeist) or be bored while you wait for the goods. Things do get a little reliant on loud noise scares toward the end, but at least the plot makes sense — and the twist doesn’t feel like a cop out like Oculus did.

Ouija: Origin of Evil is the year’s scariest horror film, and keeps things lean and mean and just in time for Halloween!