A much better film unfolds once it gets over the setup. May not be the best Ritchie/Statham team-up, but it's always at least entertaining when they get together. Made for Ritchie fans, Statham fans, and heist/revenge thriller fans.

Rated R for strong violence throughout, pervasive language, and some sexual references. 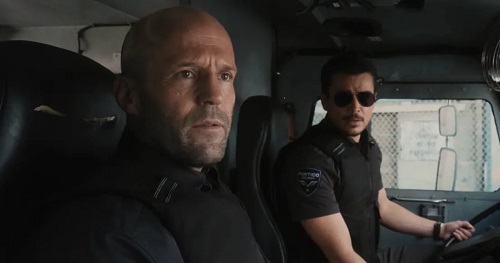 A lot of haters were quick to dismiss his live-action Aladdin, but last year’s The Gentlemen is one of his best films. So it was surprising to see a trailer for Wrath of Man so soon. Unfortunately, this Ritchie/Statham combo never even manages to rise to U.N.C.L.E. caliber.  Remaking the French film Cash Truck, Wrath of Man lacks any Ritchie signature touches. You’d have no clue he made the film if his name wasn’t attached as director, producer, and co-writer. Considering he had so much control over the project, it’s very surprising how mediocre it is.

“H” (Statham) is on his first day on the job for cash truck company Fortico Security. He’s quickly introduced to “Bullet” (Holt McCallany) who puts him through the wringer of exercise, firearm, and driving tests. One fateful day, H and Bullet are held up at gunpoint, resulting in H single handedly taking out all of the robbers. Suspicion arises with a couple of FBI agents, while most of the company regards his actions as heroic. Turns out, H is a man on the hunt, looking for the men who murdered his son, and put him in the hospital, during a robbery. Now, H will stop at nothing to find those responsible, and unfortunately for them, they have no idea who is trying to find them.

While I may have enjoyed most of the film — once it finally turns away from “Toxic Masculinity: The Movie” setup — it’s nothing more than a run-of-the-mill revenge/heist flick. Most surprising is that it’s getting a wide theatrical release when it feels better suited for a streaming launch. As much fun as it is to see Statham hunting down the cash truck robbers who killed his son, this is far removed from Transporter territory and settles for nothing more than a simple shoot-em-up.

After finishing the film yesterday, my initial impressions were much higher than after letting the smoke clear. Statham sleepwalks through most of the role, but it is fun to watch him playing a character purposely keeping himself out of the spotlight until in the heat of the moment. I’m still not quite sure why Garcia agreed to what amounts to essentially a cameo, maybe he’s already working with Ritchie on something else and wandered over from another set. Same could be said of Rob Delaney who feels like he’s from a completely separate film. Another missed opportunity is when the film rolls back in time and we spend some of it with the bad guys. None of them are even slightly interesting, and results in some of the film’s unintentionally funny moments.

Wrath of Man will go down as just another blip on everyone’s radar, regardless of the pandemic schedule delays. We’ve seen this movie, made far more interestingly, way too many times before. MGM and Miramax are probably hoping to make most of their cash back overseas, which is odd considering the Ritchie/Statham pairing in a film that takes place in Los Angeles. For those hard up on action-thrillers, or those just dying to get out of the house, it is at least a decent time killer. It never tries to change the game and sometimes there’s nothing wrong with that, but it’s hard not to expect more considering all parties involved.