Jackman ring-leads one of the year's best films and the best musical since 'Moulin Rouge' and 'Chicago.' Made for fans of high-flying musicals or anyone looking for the perfect family outing over the holidays.

Rated PG for thematic elements including a brawl. 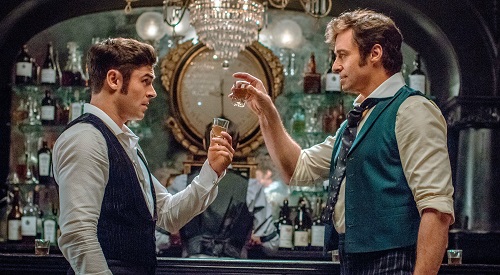 There’s no better feeling than when a film takes you by complete surprise. By the time the credits rolled for The Greatest Showman I was obsessed. Expectations were not very high walking in. Fox’s advertising has relied extensively on the fact that the film’s songs — yes, it is a full-blown musical — are “from the Academy Award winning lyricists of La La Land.”

No movie left me more cold last year than White Privilege: The Musical. It also looked like it was trying way too hard to be Moulin Rouge 2. Not that that would have been a horrible thing, but I was just hoping it could manage to be its own thing, even if owing more than a little debt to it. Well low and behold, The Greatest Showman is officially my favorite film of 2017.

Ladies and gentlemen, boys and girls, step right up! Behold the story of P.T. Barnum and his rise to becoming The Greatest Showman! Beginning with his meager days as the son of a poor tailor (Ellis Rubin with Ziv Zaifman providing vocals) and meeting the love of his life in the young and rich Charity (Skylar Dunn), Barnum sets off to prove he’s more than a worthless street rat after Charity leaves for finishing school. Cut to adulthood and Barnum has a steady job and whisks Charity away where the couple now have two children and live very happily.

But Barnum wants more. Soon enough, he has the grand idea to open a curiosity show featuring everything from a bearded lady (Keala Settle) to a dwarf named General Tom Thumb (Sam Humphrey) to a brother/sister trapeze act: Anne (Zendaya) and W.D. (Yahya Abdul-Mateen II). With the funding help of playwright Phillip Carlyle (Zac Efron), Barnum has just the show he’s always dreamed of. And what would a three-ring circus be without a little drama in the form of Swedish singer Jenny Lind (Rebecca Ferguson, vocals by Loren Allred).

If it weren’t for studio embargoes I would have proclaimed my love for The Greatest Showman for a while . But now I can finally let everyone know that this is the best holiday pick. Even if you don’t love musicals, there’s plenty to enjoy. Jackman gives another excellent performance after bidding farewell and adieu to Wolverine earlier this year in Logan, and he’s surrounded by a top notch cast to back him up.

Efron continues to prove he’s not just that guy from those High School Musical movies and makes a fantastic pairing with Zendaya. The duos’ Rewrite the Stars is a literal showstopper. When the scene came to an end, I literally looked at my colleague next to me and exclaimed, “Holy (expletive)!” It’s that good! Benj Pasek and Justin Paul have completely redeemed themselves after the failure that was La La Land’s cloying nature.

Every song is performed at full tilt vying to be the best song on the soundtrack, but the true standouts are “A Million Dreams,” “The Other Side,” “Tightrope,’ and, of course, “Rewrite the Stars.” The song “This Is Me” has already garnered a Golden Globe nomination — along with Best Actor and Best Motion Picture – Musical or Comedy — but there’s a smorgasbord of goodness here.

As if the performances aren’t enough, director Michael Gracey gives us the best musical since Moulin Rouge and Chicago. While it may not quite be considered Best Picture worthy, it’s absolutely one of the year’s best. Every scene is shot (Seamus McGarvey) and edited (Joe Hutshing) with precision. I won’t be surprised if it winds up being nominated for Oscars in those categories, along with plenty of other technical awards. Everything comes together beautifully to give us the spectacular spectacular we’ve been waiting for.