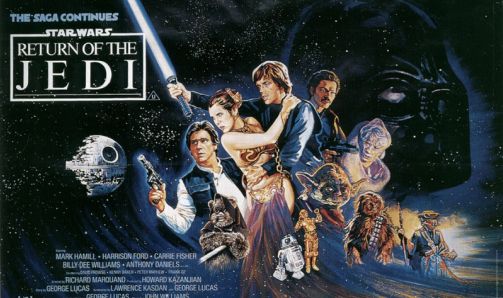 A few days ago it was reported in the L.A. Times, by columnist Geoff Boucher, as he was interviewing former Star Wars producer Gary Kurtz, that George Lucas rewrote Return of the Jedi in order to not hurt toy sales. Does this surprise any of us?

Kurtz: “We had an outline and George changed everything in it. Instead of bittersweet and poignant he wanted a euphoric ending with everybody happy. The original idea was that they would recover [the kidnapped] Han Solo in the early part of the story and that he would then die in the middle part of the film in a raid on an Imperial base. George then decided he didn’t want any of the principals killed. By that time there were really big toy sales and that was a reason.”

Kurtz went on to talk about what the supposed ending was supposed to be like – the one he preferred. With Han dead, Leia is trying to handle her new responsibilities as queen, and Luke walks off into the sunset, “like Clint Eastwood in the spaghetti westerns.”

Kurtz went on to say, “The emphasis on the toys, it’s like the cart driving the horse. If it wasn’t for that the films would be done for their own merits. The creative team wouldn’t be looking over their shoulder all the time.”

So instead of the thoughtful more real ending that could have been, we were instead fed a heavy helping of crap from the Lucas marketing machine in order to sell more toys and more merchandising.

Again I ask: Does this surprise anyone at all?