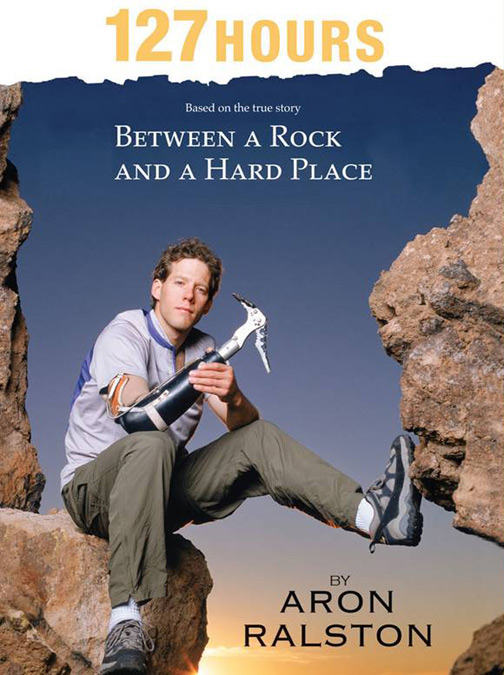 Just over seven years ago, news quickly spread worldwide
about Aron Ralston, a 20-something rock-climber who got his right arm pinned
while doing a solo hike in a slot canyon near Moab, Utah. The most memorable
part of story happened on the fifth day after he became stuck – using a cheap
utility tool with a dull blade, Aron amputated his own arm and began the rappel
and hike to safety.

Utah’s Outdoor Retailer Expo is in full swing at the Salt
Palace in downtown Salt Lake City. Fox Searchlight Pictures has a special treat
for anyone in the area – a special “First Look” into director Danny Boyle’s
film adaptation of Ralston’s story, 127 Hours. Searchlight figures that the film’s
target audience is one that would be attending an expo of this type.
Considering the story took place in Utah and 127 Hours was shot entirely in
Utah, this seems like a perfect occasion to premiere the first footage from the
highly anticipated film.

The “First Look” begins with a behind-the-scenes look 127
Hours containing interviews with Boyle (who directed 2008 Best Picture Slumdog
Millionaire), star James Franco (Milk) and Ralston himself. The three of them
individually describe the power to be found at the heart of this shocking and
amazing story, that 127 Hours is a powerful examination of a human being forced
“to cope without civilization” in a battle for “existence and survival.”

Although the story sounds edgy and graphic, Boyle, Franco
and Ralston explain it as a story of hope. Through the whole experience, even
though there wasn’t another person remotely near to him, Ralston explains that
“spiritually and emotionally, (he) was never alone.” Boyle says that the most
common response he hears people say while talking about Ralston’s story is, “I
could never do that.” His optimistic response to that is, “We could all do it!”
And that seems to be the tone and theme to 127 Hours – we are all capable of
a lot more than we think, we just need to be placed in situations that require us
to show it.

Boyle describes 127 Hours as being an “action movie where
the hero can’t move.” The exclusive teaser trailer that brings the “First Look”
to an end shows you exactly what he means by that. It is intense!

The teaser begins with shots of Boyle’s previous
fan-favorite films – Trainspotting, The Beach, 28 Days Later, Sunshine and, of
course, Slumdog Millionaire – establishing his fantastic resume. The first
shots we see are of Aron (Franco) cruising down desert trails, popping a wheelie on his mountain bike. Although he crashes pretty hard, he shrugs it off
and keeps on going, not letting it spoil his good mood. While hiking through a slot
canyon, he runs into two cute female hikers (Kate Mara from the Sundance 2010
audience favorite happythankyoumoreplease and The Sisterhood Of Traveling
Pants’ Amber Tamblyn). Knowing the area, Aron takes them to places they have
never been before, from treacherous positions in the rocks to beautiful secret blue pools under ground. But Aron quickly
leaves them to get back to doing his own thing.

Very little is actually shown of Aron’s accident and being
stuck, but the little that is shown is sure to make your heart rate increase. One
amazing shot shows Aron reaching over a large rock to pull himself up when the
rock suddenly gives in a quick shot of slow motion. The look on Franco’s face of sheer panic and terror will
haunt you. The brief shots that follow of Aron’s arm stuck in the narrow crevice and those of him
doing a one-armed rappel down a 65-foot cliff will leave you aching to see
more. The last thing you see is the title card, “There is no force stronger
in the universe than the will to live.”

The teaser for 127 Hours is the perfect example of a
“tease.” The second it ends you will want to ask to see it again. The entire
crew that made Slumdog Millionaire made it, so expect big things from it. From
what I’ve seen, it is definitely looking like a film of equal caliber.

127 Hours will most-likely premiere in the festival circuit, but it is set to have a platform release in the United States starting November 5. 127 Hours is looking
like it might be one of the best films of the year, so if you are in the Salt Lake
City area this week, be sure to stop by the Salt Palace and check out this
special exclusive. The air-conditioned 127 Hours Fox Searchlight tent is
located at the South Plaza of the Salt Palace. Since it is outdoors, you do not
need to pay admission to the expo to get into it. Not only is it absolutely free, but they offer a free ice-cold bottle of Coors (to anyone over 21) or water to
anyone who stops by to check it out. 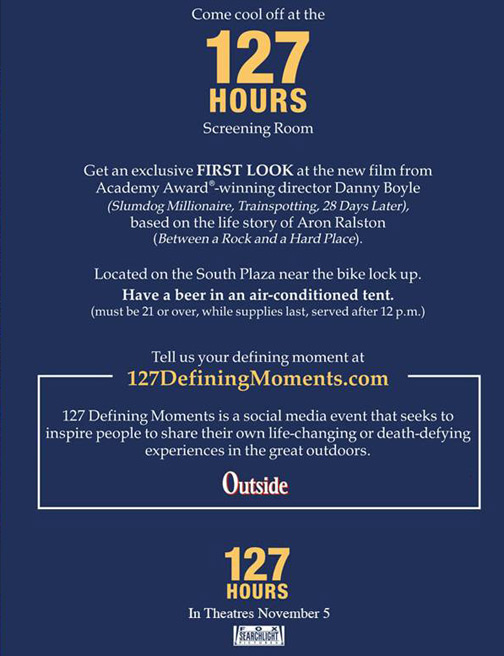 Come back to The Reel Place soon for the first images of 127 Hours.

Special thanks to Fox Searchlight.