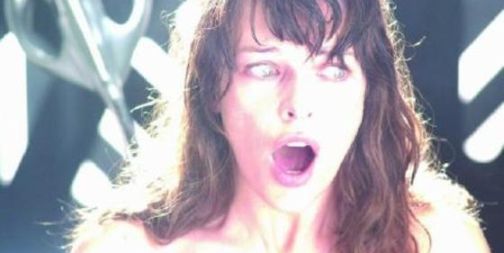 Now for the guilty pleasures, at least for me. The Fourth Kind came out recently and, I’ m going to be truthful, scared me to death. Not many movies grab me like The Fourth Kind did. Maybe I was just in the right mood for it. Maybe it’ s because I have a passing interest in aliens and find myself watching UFO Hunters whenever it’ s on the History Channel. Whatever the case may be The Fourth Kind really, really scared me.

I know that the entire thing is faked, but it was an original way to get the point across. We’ re told that there’ s a town in Alaksa that has had more abductions than anywhere else on Earth. Milla Jovovich plays a physiatrist, who is supposedly based on a real person, that has been noticing unusual occurrences with her patients. Under hypnosis her patients recount odd happenings when they’ ve been asleep or trying to fall asleep. The “real footage” is played side-by-side next to the footage with the actors. The real footage isn’ t real, but man it’ s a fun way to get the scary point across.

I know a lot of critics walked out of The Fourth Kind less than impressed with its phony-baloney story and felt like the whole “based on a true story” was a silly excuse for a hoax. For me I went into this movie, not knowing what to expect and walked out chilled to the bone. Really, I was scared here. I don’ t know how else to explain it. I had a hard time sleeping that night. I couldn’ t get the movie out of my head.

So, if you’ re looking for a Halloween movie that is fun The Fourth Kind is it. Go in with the right mindset and you’ ll find out that this movie might just scare the pants right off of you.

I was not impressed with The Fourth Kind. I walked into it not knowing a thing about it. After a few minutes I realized that I was watching nothing more than a gimmick film. The filmmakers came up with a great idea to open a fictitious movie with a disclaimer saying that “what you are about to see is a reenactment of true stories spliced with real footage from the actual events.” Good idea for an original movie – its just too bad the story they came up with was far from being anything original or new.

The Fourth Kind’ s story is nothing more than episode of The X Files – it is slow-building, full of wonder and never shows you what you really want to see. The cast is good. The idea behind it is good. But the story is redonkulous. There is nothing frightening about peering owls in a town that is known for its missing people (which in reality is caused by alcohol abuse – google it). I find The Fourth Kind boring and anticlimactic and only give it one star for its unique gimmick.