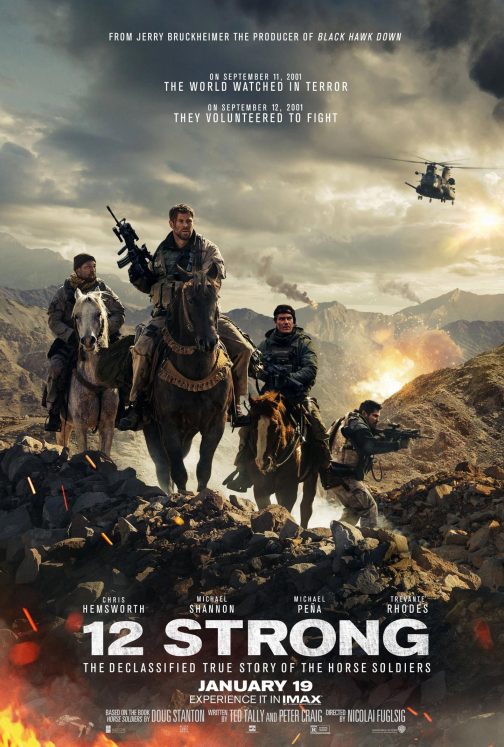 You and a guest are invited to see the new film 12 Strong for free before it opens! Click here to download your complimentary passes the special advance screening being held on Tuesday, January 16 at 7pm in Salt Lake City. Passes admit up to two (2), while supplies last, and do not guarantee admission, as the theater is overbooked. Arrive early for ticket exchange and we’ll see you there!

Synopsis: Chris Hemsworth (Thor and The Avengers films) and Oscar nominee Michael Shannon (The Shape of Water, Nocturnal Animals) star in 12 Strong, a powerful new war drama that tells the declassified true story of the “Horse Soldiers.” Based on the best-selling book Horse Soldiers, it is story of heroism based on true events that unfolded a world away in the aftermath of 9/11. 12 Strong is set in the harrowing days following 9/11 when a U.S. Special Forces team led by their new captain (Hemsworth) is chosen to be the first U.S. troops sent into Afghanistan for an extremely dangerous mission. There, in the rugged mountains, they must convince Northern Alliance General Dostum to join forces with them to fight their common adversary: the Taliban and their Al Qaeda allies. In addition to overcoming mutual distrust and a vast cultural divide, the Americans — accustomed to state-of-the-art warfare — must adopt the rudimentary tactics of the Afghan horse soldiers. But despite their uneasy bond, the new allies face overwhelming odds: outnumbered and outgunned by a ruthless enemy that does not take prisoners. #12StrongMovie in theaters January 19.