Hilarious, bright, and super fun. This is the Hulk, err, Thor movie we've been waiting for! Made for anyone looking for a smashing good time. 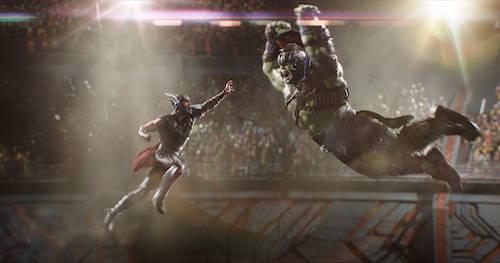 Of all the Avengers, the one with the rockiest big screen efforts has been Thor. Kenneth Branagh’s first entry was entertaining in a universe-building/Shakespearean way, but The Dark World does not hold up in repeat viewings. While it’s nothing new for sequels to feature rotating directors, Alan Taylor (TDW) — of Game of Thrones fame — took the material way too seriously.

The good news is, Marvel has upped their game and brought in Taika Waititi — one of the funniest comedy directors working today — to save Thor’s solo entries. Believe the hype. Thor: Ragnarok is not just one of the best entries of the Marvel Cinematic Universe, it’s also one of the funniest films of the year!

Thor (Chris Hemsworth) has been off on his own adventure looking for Infinity Stones and has wound up imprisoned by the fire demon Surtur (Clancy Brown). Thor learns Odin (Anthony Hopkins) is not on Asgard and the Ragnarok prophecy may soon become reality. Thor takes on Surtur, making his way back to Asgard where he finds the Bifrost guard taken over by Skurge (Karl Urban) and hilariously bad theatrical reenactments are under way portraying a vital moment from The Dark World.

Thor quickly realizes that Odin is actually Loki (Tom Hiddleston) and the two must now find Odin. With the help of Doctor Strange (Benedict Cumberbatch), they make their way to Norway to say their goodbyes to their father. To rub salt in the woods, now Hela (Cate Blanchett), Odin’s first born, arrives, destroys Thor’s hammer, and sends the two brothers crash landing on the garbage planet Sakaar. Here, Thor and Loki must team up with Hulk/Bruce Banner (Mark Ruffalo), and a fallen Valkyrie (Tessa Thompson), to escape the clutches of the Grandmaster (Jeff Goldblum), return to Asgard, and save their beloved realm from annihilation.

It certainly feels like with every MCU entry we all gather around proclaiming it’s nothing like anything they’ve done before. In the case of Ragnarok, it’s more true than ever. Waititi brings his deadpan humor along for the ride to play off Eric Pearson, Craig Kyle, and Christopher Yost’s already hilarious screenplay. The action scenes and comedy help the pace fly by, despite a few early pacing issues. Some scenes feel like they run a tad long as if watching a director’s cut, but you can see how much Waititi is relishing his chance at helming a huge blockbuster.

Directed with abandon, the film is a huge joke machine firing on all cylinders. We’ve seen Hemsworth do comedy before, but working with Waititi brings out the best of his funnyman side. The rest of the cast all work remarkably well together — Thompson comes close to stealing the show — and Goldblum is at his delirious best.

In case you were picking up on the psychedelic vibes in the trailer, they aren’t lost on the film. Sometimes they can be mismarketed and feature a totally different tone — not here. Ragnarok sets out to do one thing, and that’s Ragnarok your soks off. The best thing to do is run out and see the film on the closest IMAX screen — it’s been specially formatted during scenes to fill the screen — and buckle up for Marvel’s wildest ride yet.