Venom: Let There Be Carnage

Great fun to be had in spite of its technical issues. Made for fans of the character and those who enjoyed - or didn't - the original. 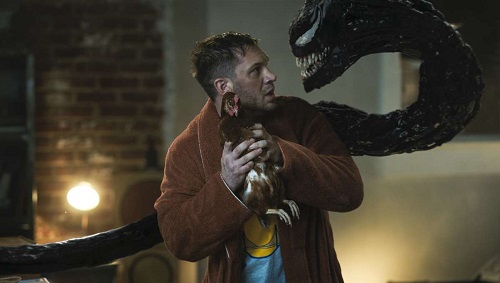 In 2018, Sony gave Venom — a Spider-Man fan-favorite villain — his own movie. After the character helped kill Sam Raimi’s Spider-Man franchise, it’s surprising they granted the character its own film. The end result was far from satisfying, but still managed to bite the head off of the box office, becoming a cash cow. Dull, with schizophrenic pacing, and a scattershot tone, Rubin Fleisher’s Venom was instantly forgettable. Aside from the post-credit scene which was an extended preview for the incredible Spider-man: Into the Spider-Verse. With only one returning writer — Kelly Marcel (sharing story credit with star Tom Hardy) — and our favorite motion-capture-super-star-turned-director Andy Serkis at the helm, is Venom: Let There Be Carnage better than Venom? Most definitely, yes.

Eddie Brock (Hardy) and Venom (also voiced by Hardy) are living as peacefully together as one can with a murderous symbiote fighting over one body. Eddie still pines over Anne (Michelle Williams) who is now engaged to Dr. Dan Lewis (Reid Scott), but destiny comes calling when serial killer Cletus Kasady (Woody Harrelson), gives them the information needed to find Cletus’s remaining victims’ bodies. Eddie is suddenly thrust back into the limelight, but after Cletus bites Eddie’s finger and draws blood, Cletus is infected with “Carnage” (a red-symbiote), i.e. bigger and meaner. Now, Eddie must choose to let Venom take over after Anne goes missing in a scheme involving Cletus’s quest to reunite with the love of his life, Frances Barrison/Shriek (Naomie Harris), who is being held at Ravencroft Institute.

Clocking in at a scant 90 minutes is nothing short of a miracle for any movie coming from the Marvel factory these days. While it is positioned as part of the “SSU” (Sony Spider-Man Universe), it’s still obviously a Marvel product. The best part of Let There Be Carnage is that it focuses much more on the Eddie/Venom dynamic with hilarious results. The fact that side characters also know about Venom certainly helps with some additional hilarity ensuing from their encounters with the psychotic symbiote.

Serkis, Hardy, and Marcel lean heavily into the weirder, funnier side of things, but there are still some minor issues. The action is filmed/edited disastrously — you’d never know Oscar winner Robert Richardson was director of photography — and there are way too many instances where you can’t tell what Venom or Carnage are saying. Thankfully, what can be deciphered hits more of the right notes this time and audiences are in for a far more wham-bam time at the theater. Also irksome is Harrelson settling into a one-note version of Mickey Knox from Natural Born Killers — at least they at least got rid of the ridiculous red curls from the end of the first movie. The usually reliable Harris gives the worst performance of her career.

Those who liked the first one will undoubtedly love this one. Those of us who didn’t like the first one will walk out with a smile on our face. Let There Be Carnage cranks everything up to 11, but considering it’s a comic book movie sequel, it’s to be expected. If they continue on the new chosen path, I won’t mind further Venom outings, especially with Carnage out of the way. There is only one mid-credit scene attached that you absolutely don’t want to miss. As long as you keep your expectations in check, and remember that this is an “In Association with Marvel” product, there’s way more to enjoy here than the original film.