Venom uses a line that includes "like a turd in the wind," and that's exactly what this will be. Thankfully not connected to the MCU. Made for only the most hardcore fans of the character.

Rated PG-13 for intense sequences of sci-fi violence and action, and for language. 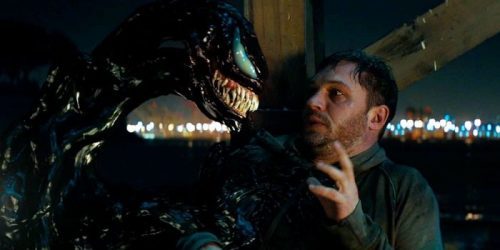 When it comes to Marvel movies, there’s the MCU, Fox’s X-Men, and then Sony’s Spider-Man universes. Venom has been a long time coming, and no matter how much Tom Hardy and Sony want to kick off a Sinister Six spinoff, they need to stick to what they’re good at. And it’s not villains. There hasn’t been a single great Spider-Man villain since Doc Ock in Sam Raimi’s Spider-Man 2.

Antiheroes can be a lot of fun when you have a character you can root for. But when your film feels like it was written by a group of 5 year olds, and the visual effects get worse as the film lurches to the finish line, audiences’ spidey senses will be tingling within 10 minutes that director Ruben Fleischer (Zombieland, 30 Minutes or Less, Gangster Squad) has officially derailed all hope.

Eddie Brock (Hardy) is a street journalist searching for all things true. His fiancée Anne Weying (Michelle Williams) hopes he can contain himself when he sets his sights on Carlton Drake (Riz Ahmed). Anne is a lawyer whose firm is representing Drake’s Life Foundation and sets up an interview with Drake for Eddie. And just wouldn’t you know it, Drake doesn’t like Eddie nosing about, especially with rumors revolving around numerous deaths linked to his organization.

Turns out, four symbiotic lifeforms were brought back from outer space where Drake is searching for new habitable worlds, but one goes missing — “Venom” — and winds up attaching itself to Eddie. Now, Eddie must find out the truth behind the Life Foundation and stop Drake’s plans to host an attack on Earth after bonding with another symbiote named “Riot.”

If you’ve ever wondered what it would look like if you asked your kid to adapt a comic book into a movie, look no further. Full of some of the most atrocious dialogue of the year — and the most boring action scenes — Venom is cinematic poison. Barely making a lick of sense, it’s a wonder the film is as long as it is. The scary part is that there’s an unrated version on the horizon. No amount of blood and guts could save Venom from what screenwriters Jeff Pinkner, Scott Rosenberg, and Kelly Marcel have wrought.

Hardy is completely wasted and never looks like he’s having any amount of fun as he gets to pummel bad guys and crash through trees with superhuman strength in slow motion. Williams is relegated to the token love interest role, the only saving grace being at least Anne is never used as the ol’ damsel in distress. Ahmed barely registers as a regular character, let alone a villain.

The required Stan Lee cameo comes attached, along with an end credits stinger. There are technically two, but the second one is literally an action sequence from Spider-Man: Into the Spider-verse which looks a million times more fun than any second of Venom. Fleischer has made his worst film yet and Sony has let the opportunity for spin-offs crash and burn with a single film.