Surprisingly hilarious and completely infectious with a side of demented. Made for anyone dragged to it by their kids, oh, and of course said kids. 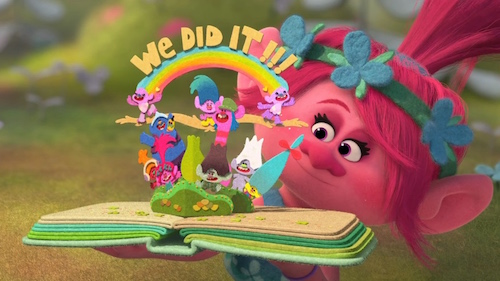 Movies based on action figures are nothing new or surprising anymore. The real surprise is when one of them is finally good. If anyone had ever told me there’d be a day when a movie based on Thomas Dam’s “Good Luck Trolls” would be surprisingly fun, I’d never believe them. But yet, here we are. DreamWorks has granted director Mike Mitchell (The SpongeBob Movie: Sponge Out of Water, Sky High) and co-director Walt Dohrn (the SpongeBob TV series) the luxury of letting their freak flag fly with Trolls. Featuring a game voice cast, a silly and surprisingly demented screenplay, and some of the brightest animation of the year, Trolls beats expectations with (literal) flying colors. Believe me, I’m as shocked as you are.

Our titular creatures can’t help but live in a constant state of happiness while the evil Bergens — large Shrek-esque creatures — have discovered that they too can find one moment of peace: by eating a troll. Every year, the Bergens hold a Trollstice festival where the trolls are eaten in the name of happiness. But this year, King Peppy (voiced by Jeffrey Tambor) leads his fellow trolls in an escape. King Gristle Sr. (voiced by John Cleese), banishes the Chef (voiced by Christine Baranski) after the trolls have vanished and poor prince Gristle Jr. (voiced by Christopher Mintz-Plasse) is doomed to never find true happiness.

Twenty years later, Princess Poppy (voiced by Anna Kendrick) has had enough of hiding. She believes there’s no way the Bergens are still hunting for them and decides to throw the biggest party her fellow trolls have ever seen. Much to the chagrin of party pooper Branch (voiced by Justin Timberlake) who is convinced that Poppy is going to get them all killed. Well, just wouldn’t you know it, the banished Chef hears Poppy’s shenanigans and a group of trolls are captured and taken back to Bergentown where their fates await. Poppy convinces Branch to join her on the quest to bring back her friends and save the day!

Trolls is infectious — in the best ways possible. After enduring a whole summer of Timberlake’s “Can’t Stop the Feeling,” I was seriously worried when the first pop song was ushered in mere minutes from the DreamWorks logo. But low and behold, along came some outright hilarious jokes and the happiest-looking animated film washed over our eyeballs. Granted Trolls is nowhere near the best animated film of the year — I still stand by Zootopia at this point in the year — but it is absolutely one of the most fun. Parents, brace yourselves for the onslaught of merchandising, including the film’s soundtrack. Yes, Trolls is a musical. And while it is infused with countless pop tunes, there are at least a few original numbers. But every single one of them is an earworm of the highest order.

It’s no surprise the cast are having as much fun as they are — even Russell Brand isn’t grating! — and some have way more to do than others, but it’s very evident to see that everyone involved loved working on this project. It’s a good thing screenwriters Jonathan Aibel and Glenn Berger (all three Kung Fu Pandas, The SpongeBob sequel, King of the Hill) were allowed some artistic freedom with the project. Not all the jokes revolve around hugging and glitter bombs. I knew I was in safe hands when a trio of young trolls ask Poppy why the Bergens don’t do anything fun. You know, like having slumber parties, or birthday parties, or watching your parents while they sleep. It’s that exact kind of weirdness that elevates Trolls out of your expectation’s doldrums. Aibel and Berger know surreal and it permeates the whole production. Rest easy parents, Trolls is a good old time and a fantastic holdover until Disney releases the spectacular-looking Moana. Kids will love Trolls and adults will find plenty to laugh at as well. Sometimes isn’t that all we need when it comes to family entertainment? Sometimes it’s plenty enough for me.