Still doesn't reach the heights of the live-action entries, but at least it's releasing in theaters and available on all major VOD platforms for optimum home consumption. Made for those who were still able to enjoy the first outing in spite of its animation-family-friendly flaws and families looking for something kooky, spooky, or ooky, to watch in October.

Rated PG for macabre and rude humor, violence and language. 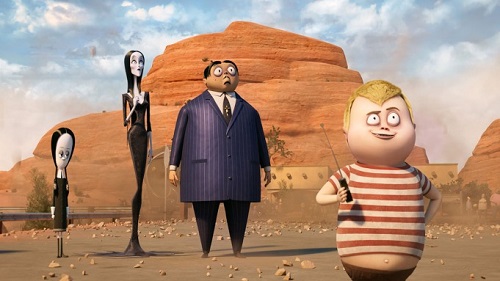 While 1993’s Addams Family Values may be as perfect an Addams Family live-action film as we can hope for. The new animated sequel, The Addams Family 2, also bests the first animated outing. Although I did enjoy The Addams Family 2, it is what audiences probably were expecting the initial movie to be. Episodic, deliriously weird, and darkly punny, returning directors Greg Tiernan and Conrad Vernon — joined by Laura Brousseau this round — keep the jokes and situations driving at high speed, even if one plot twist is way too obvious before they get to it. They still may not reach complete anarchy like their R-rated Sausage Party, but even with our beloved Family confined to a PG rating, they still find ways to tickle your funny bone.

Gomez (voiced by Oscar Isaac) feels distance growing between himself and daughter Wednesday (voiced by Chloe Grace Moretz). Lucky for him, he knows just how to reconnect through the age-old trope of a forced family vacation. With the rest of the family in tow—- Morticia (voiced by Charlize Theron), Uncle Fester (voiced by Nick Kroll), Pugsley (voiced by Javon ‘Wanna’ Walton), Thing, and Lurch, they hit the road with Gomez’s eyes set on California. But there’s a kink in their noose with a possible scandal afoot as scientist Cyrus Strange (voiced by Bill Hader) lures Wednesday to his home in Sausalito where he will try to educate her as to who her real father is or isn’t.

Could Addams Family 2 have been better? Possibly, but the characters continue to stay true to their roots — right down to the original cartoon strip animation style — and the plot never gets too cutesy. There are plenty of jokes and references aimed at adults and the animation continues to be top notch. The pacing is pretty breakneck and I was surprised with how quickly they dove into the road trip plot. Studios will continue to keep the Addams brand alive and I’ll stick with it through most of the endeavors. Granted, I’ve never bothered with the direct-to-video Addams Family Reunion. So long as the feature films maintain the ooky, spooky laughs we’ve come to expect, what more can you want?