A teenage soap opera adaptation of Made for fans of the

Rated PG-13 for some violence and action. 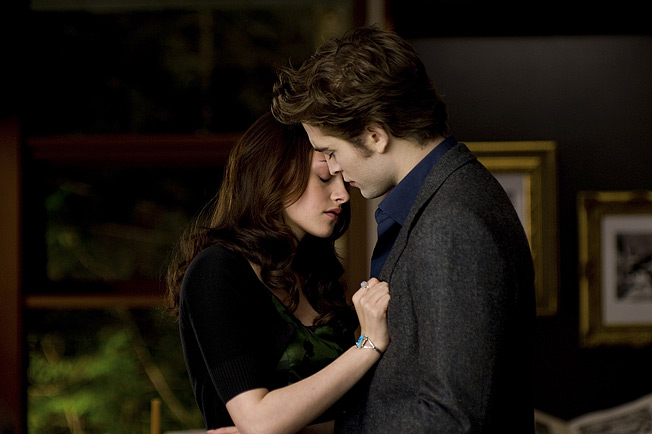 If you thought that Seinfeld earned the title “the show about nothing,” you obviously haven’t seen New Moon – the longest movie where absolutely nothing happens. No plot.

New Moon – the second chapter of the Twilight franchise – is basically the same movie as the first, just with a different freaky male romantic interest. After Bella (Kristen Stewart, Adventureland) unintentionally poses a moral threat to Edward (Robert Pattinson, Harry Potter and the Goblet of Fire) and his family, the Cullens leave the small town of Forks to begin a new life somewhere else, leaving behind everything – including Bella.

In a deep dark rut of depression, Bella begins performing stupid reckless acts just to be visited by warning apparitions of a protective Edward. After her suicidal acts lose their luster, Bella copes with her depression by spending all of her time with a local Native American boy, Jacob (Taylor Lautner, Cheaper By The Dozen 2). But the relationship between them is damned to be like the one with Edward because of Bella’s everlasting love with Edward and Jacob’s new monstrous secret.

Other than a tiny ten-minute plot that’s conjured up in the final moments of the movie (which is a blatant rip of Romeo and Juliet), that’s all there is to New Moon. Only two revelations come about that further the saga’s storyline – one you see in the the trailer (Jacob is a werewolf), and the other we’ve all presumed since the story began (I’ll keep that one a secret for those who don’t want the only surprise spoiled).

Considering how much of a huge impact the Twilight saga has had on pop culture worldwide, it’s shocking to me to the see the low-caliper in which the films are made. Every aspect of these movies are executed in the worst possible way. Each one of the the following rants exemplifies those poorly crafted aspects:

– Acting. Taking off your shirt multiple times in a movie is not acting (Jacob). Being slightly more tan than you were in Twilight, constantly breathing deeply, biting your lip and screaming is not acting (Bella). Smashing and contorting your face to show disgust is not acting (Edward). Don’t even get me started on the secondary character’s acting. Every one of the werewolf gang members that Jacob runs around with needs to take acting lessons. I’ve seen better acting on the CW.

– Directing. The directing in New Moon is no better from that of Twilight. Director Chris Weitz (The Golden Compass) relentlessly fills the frame with absurdly long single shots of nothing – a spinning overhead shot of Bella pointlessly crawling through the woods for a minute, a 360-degree slowly rotating shot of Bella sitting in a chair for over a minute just to show the months and seasons pass outside her window. For some reason, Weitz also feels the need to over-use slow motion effects – not only during action scenes, but any time a boy (shirtless or not) enters the screen. The majority of the New Moon consists of improperly used camera work – including several sequences that come across as dialogue-less music videos set to the least fitting music possible. Combined, all of these misused elements are enough to drive one crazy.

– The story (or lack thereof). It’s hard to believe a slow, strung-out love story when not an ounce of chemistry exists between the romantic leads. I don’t buy that Bella could be that caught up in Edward when he’s so shut-off and cold. He never even smiles at her, so when he tells her that he loves her, I laugh. I don’t buy it. And when Bella begins passing time with Jacob, she’s so rude and blunt to him about how they will never have a romantic relationship that