Although still relentlessly dabbling in immature teenage drama, the series at last finds it’s footing through good performances, solid storytelling and great directing. Made for fans of Twilight (obviously) and toned-down vampire flicks (if they can forgive the love triangle for popping its head up now and again).

Rated PG-13 for intense sequences of action and violence, and some sensuality. 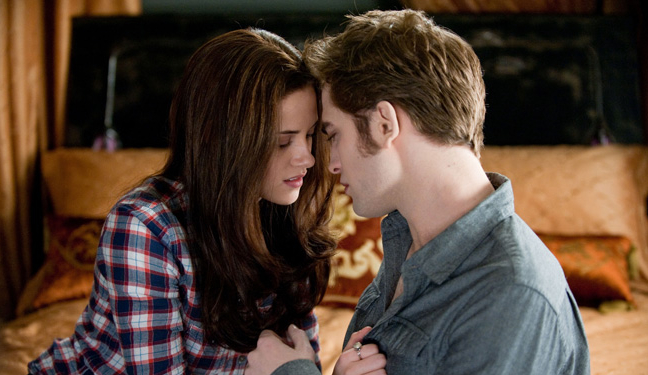 The first two installments of the Twilight Saga are utterly horrid. Because the “twi-hards” (the name given to die-hard Twilight fans) will screech and squeal over anything Twilight related, they were extremely successful – even though they do not deserve their monetary success. The first film scored a solid 50% on Rotten Tomatoes, while the second one, New Moon, only scored a 27%. Anyone who knows anything about decent filmmaking knows that those two movies are crap. But it is amazing what a director who knows the genre can do to a poor “saga.”

Twilight (2008) was directed by filmmaker Catherine Hardwick, an indie director whose credits include the teenage drama Thirteen and the bad skateboarding flick Lords Of Dogtown. Her lack of potential caused Twilight to be shallow, superficial and void of any constant tone.

New Moon (2009) was directed by Chris Weitz, mostly known for his adult comedy American Pie and the box-office letdown The Golden Compass. Again, another director with no experience in the given genre makes for a lackluster movie. Blessed be the studio executive who proposed hiring a director with previous vampire experience for Eclipse, the third installment to the Twilight Saga.

Director David Slade (30 Days Of Night) should have been at the helm of this series all along. Without a doubt, had he directed the first two installments as well, there would be more Twilight fans than just those who read the trash novels. Slade makes the series actually work. Instead of watching decent actors give terrible performances, in Eclipse we see them actually act – something I was sure until now that Robert Pattinson (Harry Potter And The Goblet Of Fire) and Taylor Lautner (Sharkboy And Lavagirl) were utterly incapable of doing. Now we actually believe that a true love exists between Bella (Kristen Stewart, Into The Wild) and Edward (Pattinson). Now we actually believe that an ominous threat is present, that lives are at stake. Believability is a fully functioning factor here.

Being a fan of vampire flicks, it is nice to have properly directed action-packed vampire scenes. Slade knows how to film the action – something both previous directors were oblivious to. Slade knows how to create a dense tension that captivates the audience’s attention. Slade simply knows what he is doing! And by bringing his expertise to the saga, he has finally made the movies work – especially for those who want the bad taste of the first two movies stripped from their mouths.

Eclipse picks up an untold short time after New Moon. All is well in small-town Forks, Washington, but the same cannot be said for nearby Seattle. Young people are disappearing all around town in spurts of random violence. A vampire army of “newborns” (recently converted out-of-control vampires) is posing a threat to the Cullen family’s peaceful “vegetarian” way of undead life. The army’s purpose is unknown, but vendetta-driven Victoria (Bryce Dallas Howard, The Village) from the first movie is suspected as being its leader.

When Edward’s sister Alice (Ashley Greene) has a premonition that the army is after Bella, the entire Cullen family takes the utmost urgency in protecting her. The threat of the newborn army is so dangerous that the Cullens know they cannot do it on their own. Being previously romantically involved with Bella and continuing to care for her, Jacob (Lautner) and his shirtless werewolf family bury the proverbial hatchet that exists between vampires and werewolves to ensure her safety.

Once the werewolves and vampires team up, the movie begins to get fun. There are still little rifts between the clans, but the overall tone is an entertaining one. It no longer tries too hard to get laughs – they come naturally. Eclipse even begins to poke fun at itself with Edward saying lines to Jacob like, “Do you ever put a shirt on,” and Jacob quipping, “We both know I’m hotter than you,” to the cold-bodied Edward. Slade knows what type of movie Eclipse is and for whom it is made (girls and women) and has no problem poking fun at it.

But even though there are many great things that Eclipse achieves, a large part of that is because of how good it is compared to the others. While Eclipse is easily the best of the saga thus far, it isn’t without its faults.

One area in which Eclipse rises above Twilight and New Moon is in its characterization. Until now, every character has been flatter than a board, making it impossible to have an emotional attachment or connection to them. All of that changes here. But it is mostly due to a good director actually directing the actors. The acting in Eclipse makes worlds of difference to the way the story is told and received. But the screenplay does some things that beat the newly defined characters over the head.

Three times throughout Eclipse we leave the narrative to see awful sequences explaining the back-stories to several characters. These period-piece flashbacks stick out like a sore thumb. In acting, storytelling and overall achievement, each one is more painful than the previous.

Although the level of teenage love triangle isn’t as ridiculously over-portrayed in Eclipse as it was in New Moon, it is still a little too much. The “calm before the storm” scene just before the climax of the movie is shattered by an unexpected, unnecessary and unexplained moment of teenage indecision that kills the moment and lessens the intensity of the scenes to come.

My final complaint lies in the content of the movie. Twilight is a series that is known for winning over girls and women alike, from ten-year-olds to seventy-year-olds. Eclipse seems to lose its sight on who its audience is. There is frisky “dry humping” scene halfway through the movie that is definitely not suitable for the younger audience. The amount of violent decapitations that occur in the final battle of the movie are also not suitable for them. Parents, remember that this is a PG-13 movie intended for those 13 and up. It does not need to be R, but you definitely need to know that your pre-teen kids should probably not see it.

With my liking of Eclipse comes a fear for the following two Twilight movies (the fourth book, Breaking Dawn, is being broken up into two movies). David Slade is not directing it. Bill Condon, another director without any experience in the genre, has been hired to film both installments back-to-back. His biggest credit is Dreamgirls, which couldn’t be farther from what we need to make Breaking Dawn as good as or better than Eclipse. And as if that isn’t enough, the ongoing story that has been driving the saga through the first three movies comes to a conclusion in Eclipse. What in the world can they bring to the “saga” now? Is there even a plot to the last book? How can it be dragged out into two movies? And how can the director of Dreamgirls make it entertaining in the slightest?

For those who twi-hards out there who see each movie multiple times in the theaters, Eclipse finally gives you a justifiable reason for such behavior. For those who despise the saga – much like I did prior to Eclipse – give it a shot. Eclipse is actually entertaining, enthralling, intense and fun.
Photo credit: Summit Entertainment