The Secret Life of Pets

Hilarious, fast paced, and hands down Illumination's best film yet. Made for family members and animal lovers of all ages.

Rated PG for action and some rude humor. 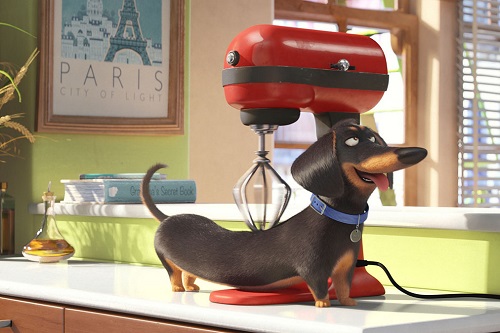 While I highly enjoyed Despicable Me and its sequel, it was high time that Illumination Entertainment make a really good movie. While the less said the better when it comes to Hop, The Lorax, and Minions, The Secret Life of Pets feels like a masterpiece. While it’s not a better movie than either Finding Dory or Zootopia, it maintains its high energy for the entire runtime and provides just as many laughs and feels as its Disney counterparts. It only took them five films to get going, but if their December release, Sing, is anywhere near as good, Illumination could be gearing up to give at least Dreamworks a run for their money.

I don’t know anyone who hasn’t wondered what their pets do all day, or anytime they’re left alone for that matter. Here, we get swept up on the misadventures of Max (voiced by Louis C.K.) who adores his owner Katie (voiced by Ellie Kemper). But their life gets the rug pulled out from under them when Katie brings home the ginormous Duke (voiced by Eric Stonestreet). Duke is a bully and will do anything he can to keep his new home, while Max would do just about anything to get Duke thrown back to the pound.

One fateful day in the park, Duke tries to get rid of Max once and for all. But they both wind up lost and now, it’s up to the rest of their friends — Gidget (voiced by Jenny Slate), Tiberius (Albert Brooks), Chloe (Lake Bell), Pops (Dana Carvey), Buddy (Hannibal Buress) and Mel (Bobby Moynihan) — to bring their four-legged besties home. That is, if they can keep themselves safe from the revolution of the “Underbelly of Flushed Pets” lead by cute as a button bunny Snowball (voiced by Kevin Hart) who wants to kill all humans.

Directors Yarrow Cheney (making his feature-length debut) and Chris Renaud (both Despicables, The Lorax) make a beeline for the funny bone and never let up. Yes, being a movie about pets there are bound to be a few gross-out gags, but we all know animals poop and pee on your stuff. The more miraculous aspect is that screenwriting duo Cinco Paul and Ken Daurio (the “brilliant” minds behind such films as Bubble Boy, The Santa Clause 2, Horton Hears a Who!, College Road Trip, both Despicables, Hop, and The Lorax) have finally honed in an honest to goodness screenplay. It never treats the audience like idiots and never sinks too lowbrow to turn off staunchy adults.

Every pet gets a chance to shine, although I do wish there had been more of Buddy, the wiener dog — I own two after all. But they all serve a purpose to the plot and keep the momentum going. The voice cast are having a lot of fun serving up their one-liners with some of them even playing against type. Slate in particular is known as being so brash she managed to get fired from Saturday Night Live after one show. Here she gives Gidget a heart and soul to go along with her bubbling crush on Max. And Brooks relishes his chance to play a pseudo-villain, threatening to eat every creature he encounters which is a far cry from his return as Marlin the clownfish last month.

Just about the only warning to give when it comes to The Secret Life of Pets is to make sure you don’t get to the theater too early. There is a short, Minion Mowers, that is one of the worst five minutes you’ll suffer through this whole summer. Jam packed with just about everything wrong with the characters, I fear whomever finds this a winning way to start any movie — let alone one of the three best animated films of the year. Here’s your warning to show up late, but do make sure you don’t miss one second of The Secret Life of Pets, because it’ll make you howl with laughter and just may make you get a little misty eyed as well.