Never lives up to the expectations Black sets himself up for. Made for fans of the original who will be able to be more forgiving. 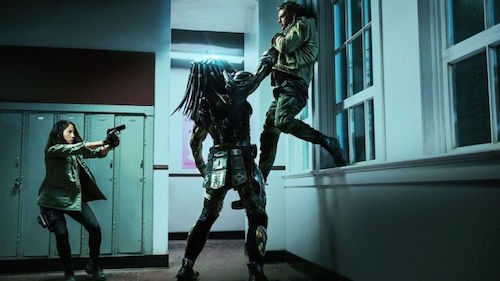 If there’s any reason I was excited for The Predator, it’s co-writer/director Shane Black. The man has been making a resurgence since Kiss Kiss Bang Bang put him back on the map. After the triple play of KKBB, Iron Man 3, and The Nice Guys, there should have been no way for Black to fail at continuing on with a franchise he starred in 31 years ago. Rumor had it that he also provided uncredited rewrites to the Arnold Schwarzenegger classic, but The Predator winds up as an oddball mix of big dumb fun and just plain super dumb.

In the present day, a Predator has crash landed on Earth. After making bloody first contact with sniper Quinn McKenna (Boyd Holbrook), McKenna quickly mails off some alien hardware back to his house. There, his son Rory (Jacob Tremblay) manages to turn it on and a new Predator comes hunting. Meanwhile, McKenna is thrown on a bus with a gang of prison misfits — Nebraska (Trevante Rhodes), Coyle (Keegan-Michael Key), Baxley (Thomas Jane), Lynch (Alfie Allen), and Nettles (Augusto Aguilera). With a new Predator hot on Rory’s heels, McKenna joins forces with his newfound frenemies — and an evolutionary biology professor (Olivia Munn) — to keep the Predator, and agent Will Traeger (Sterling K. Brown), away from his son and figure out exactly why the Predators are back.

With Black at the helm, The Predator should have been a wham-bam-thank-you-ma’am action extravaganza. Instead Black — along with co-writer Fred Dekker — merely cobble together a coherent enough story to barely push the Predator series into new territory. This is the fourth official entry aside from two excursions battling Xenomorphs. So at least they tried taking it in a new direction?

Black and Dekker have provided us action/horror/sci-fi classics such as House, Night of the Creeps, Lethal Weapon, The Monster Squad, Last Action Hero, and some of the better episodes of Tales from the Crypt. Unfortunately, The Predator is the kind of film that veers from wow, that was really cool, to okay that was super dumb in the same scene. At least it is peppered with some classic Black moments of hilarity and bloodshed. And the camaraderie amongst the cast is infectious. Even if Brown seems hellbent on chewing every inch of scenery he can.

The Predator never lives up to the original while never trying to stand on its own either. At least there are some over-the-top action scenes and plenty of blood for interested viewers. It’s never horrible, but never truly awesome either. In a summer filled with Mission: Impossible – Fallout’s jaw-dropping stunts and the “snapture” of Thanos, The Predator barely registers. It may not be a complete bust, but it should have been way better than this considering everyone in front of and behind the camera.