Hilarious, raunchy, and heartfelt. A new Christmas classic is born! Made for seth Rogen fans and anyone looking for a film oozing with the holiday spirit.

Rated R for drug use and language throughout, some strong sexual content and graphic nudity. 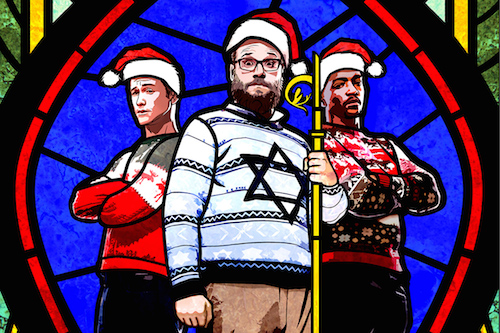 Ho ho ho, now this is more like it. Studios really can still make a good holiday film after all! Just when we thought Love the Coopers had come to destroy our Christmas cheer, along comes a gaggle of potheads to bowl us over with the true yuletide spirit. Leave it to Seth Rogen, Joseph Gordon-Levitt, and Anthony Mackie to make one of the year’s most hilarious trios as they take us through the holiday motions in The Night Before. Sure, it’s jam-packed with lowest common denominator humor, but that doesn’t mean it can’t still be smart and damn funny. Armed with always reliable director Jonathan Levine — All the Boys Love Mandy Lane, The Wackness, 50/50, Warm Bodies — it shouldn’t come as too much of a shock that there’s every bit of heart and warmth amidst the potty humor.

In 2001, Ethan (JGL) lost his parents in a car accident. Lucky for him, he’s blessed with two of the world’s best friends — Isaac (Rogen) and Chris Roberts (Mackie) — who vow that he’ll never spend Christmas alone. Over the years, Isaac and Chris have started to move on with their lives — Chris is a professional football player and Isaac is now married to Betsy (Jillian Bell) with a baby on the way — and each year it’s getting harder and harder to keep their tradition alive. That is until Ethan steals a Christmas miracle when he finds tickets to the holiday’s hottest, most secret, party. Now, Ethan forces his friends to endure one last night they might never remember, all while holding out hope to win back his one true love, Diana (Lizzy Caplan).

Man, oh man, does this make up for the vitriol we had to spew upon last week’s Love the Coopers. Not only is The Night Before one of the year’s funniest comedies, it’s a spectacularly heartfelt ode to the Christmas classics my generation grew up with. There are plenty of nods to everything from Die Hard to the first two Home Alone films. Yes, a new Christmas classic is born. Risen from the ashes of Nothing Like the Holidays, Four Christmases, Fred Claus, Deck the Halls, Surviving Christmas, The Polar Express, and Christmas with the Kranks, this is one of the best since Bad Santa, Love Actually, and Elf all came out in 2003. There have been some others along the way, but this really takes the cake and just oozes Christmas from every frame.

The cast are having a blast, and thankfully so are we. How many times have we been burned by a film where the cast were merely enjoying a studio-paid vacation? Here’s looking at you Adam Sandler who’s responsible for one of the worst Christmas/films ever: Eight Crazy Nights. The Night Before just wants everyone to have a good time and that’s exactly what we get. Even Michael Shannon gets to steal every scene he’s in. Mr. Green is one of the best characters of the year.

There may be four credited screenwriters — Levine is joined by Kyle Hunter, Ariel Shaffir, and Rogen right-hand man Evan Goldberg — fill the film with spit-out-your-soda hilarious lines of dialogue and some of the most outrageous visual gags we’ve been waiting for since This Is the End. Some may have found The Interview a bit of a let down after they made one of the best apocalypse films ever, but they are right back where they belong, keeping the hilarity chugging right along with the message.

Don’t think the film has an agenda, if it does, it’s to let the audience join in on the year’s best night out. The Night Before may not be for every taste, but for those looking for the year’s most spirited, balls out, Christmas comedy, this is all we need to get through the holidays, at least until we get to see how Krampus plays out. If it’s anywhere near as delightful as The Night Before, then merry Christmas to all and to all a good night, indeed!