Doesn't have the room it needs to breathe, but it's still highly entertaining and keeps Affleck's streak going strong. Made for fans of gangster flicks who are bound to be let down with Scorsese's offering this week.

Rated R for strong violence, language throughout, and some sexuality/nudity. 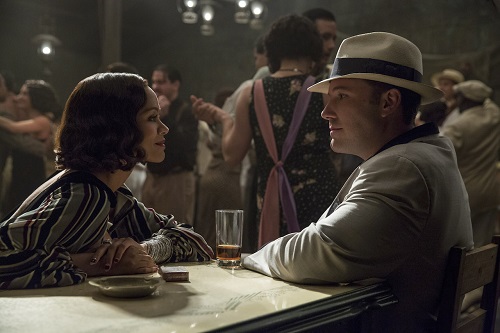 It’s still hard to believe that Live by Night is only Ben Affleck’s fourth directorial effort. He followed up his surprise debut, Gone Baby Gone, with The Town and the Oscar-winning Argo, proving his talent behind the camera was no fluke. Now, Affleck returns to his Dennis Lehane inspirations — the author also wrote the Gone Baby Gone novel — and it proves another perfect fit. Even if Live by Night falls short of the greatness of Argo.

In the 1920s, Joe Coughlin (Affleck) has returned from war with a chip on his shoulder, vowing to never follow orders again. He gets caught up in a rum war between the Irish — led by Albert White (Robert Glenister) — and the Italians — led by Maso Pescatore (Remo Girone). Sides are chosen quickly for Joe after he’s betrayed by his girlfriend Emma (Sienna Miller), who also happens to be Albert’s girl, too. Joe agrees to join Maso and take over his rum bootlegging in Florida, after he learns that Albert is down there and wants to settle the score after Emma winds up swimming with the fishes.

Joe’s joined by the only friend he can trust, Dion Bartolo (Chris Messina), and the two pair up with the Suarez siblings: Esteban (Miguel) and Graciela (Zoe Saldana). After prohibition ends, Joe comes up with a plan to build a casino, even though gambling isn’t legal yet. Chief Figgis (Chris Cooper) changes his mind on giving him breathing room after his daughter Loretta (Elle Fanning) returns home from getting hooked on heroin in Los Angeles. Meanwhile, Joe also finds himself in the crosshairs of the KKK after Figgis’ brother-in-law RD Pruitt (Matthew Maher) demands a high share due to his interracial relationship with Graciela.

As you can see, there is a lot going on in Live by Night. It shouldn’t come as a surprise; gangster films are never short and sweet, but they don’t always equal instant classics either. Even Martin Scorsese was playing things a little safe in Casino. But make no mistake, this is every bit the sprawling gangster film that would have fit squarely alongside any Scorsese masterpiece. Even if it feels surprisingly short shrifted. There’s a much longer film lying around editor William Goldenberg’s office somewhere, and whether it would make the theatrical version better or worse would be up for debate. What we do get is at least extremely entertaining.

Unfortunately, it also bears the cross of being a passion project — something that highly afflicts Martin Scorsese’s Silence (also opening wide this week). With Affleck directing, writing, producing, and starring, there was no one around to tell him when to stop. I’m sure this was thanks to Warner Bros., after entrusting him with the film due to the his previous successes and his biggest surprise as one of the best Batmans. It still hasn’t been announced if he’s going to be directing — and I hope he does — but it would be nice if someone was brought in to keep him a little more reigned in. The good news is that the film flies by and Robert Richardson’s cinematography is Oscar worthy, as is Elle Fanning.

While the film is taking its share of flack — it’s at a low 32 percent on Rotten Tomatoes — but this is exactly the kind of gangster movie I like. Full of flapper girls,  jazz music, fedoras, and tommy guns, Live by Night fits right alongside The Untouchables, Miller’s Crossing, and Road to Perdition. In the end it may feel slightly anticlimactic — although a loose thread getting tied up certainly caught me off guard after I was about to write it off as a missed opportunity — but there could possibly be a fuller cut come video release. I’d be more than happy to revisit Live by Night in that aspect to see it live up to its full potential and expectations.