An almost great horror with a lackluster ending. Made for anyone who sneaks out right before the end. 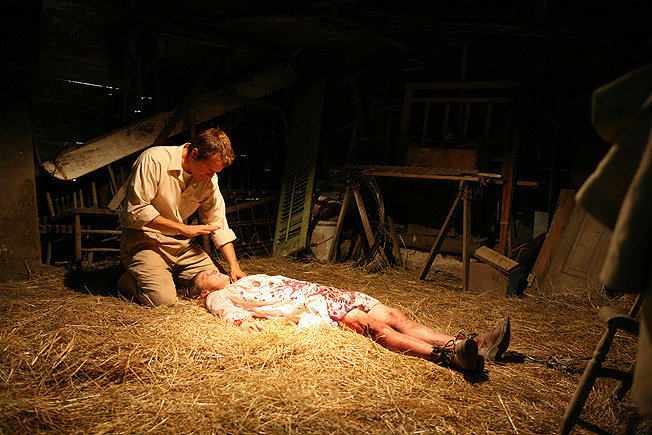 “Exorcism” centers around the story of one man, Father Cotton Marcus (Patrick Fabian, Veronica Mars) who as a preacher has lost his faith in God. Being a man of faith, he has admitted to performing numerous exorcisms knowing full well that the people were fine and that he just coned them out of their money. He justifies all this by telling himself that he is providing a service to “cure” them of whatever they thought was ailing them when in reality he knows it really doesn’t do anything.

After reading in the paper that a small child had died during an exorcism, he sets out with his “documentary film crew” to perform another exorcism to prove that they are nothing more than a big hoax.

We then follow Father Marcus into rural Louisiana where we meet an overly controlling religious father named Louis Sweetzer (Louis Herthum, Breaking Bad) who is calling for the exorcising of his daughter Nell (Ashley Bell, United States of Tara). Louis tells Father Marcus that every night his daughter slaughters the animals on the farm and then remembers nothing the next morning. With this troubling knowledge Father Marcus pulls out all the stops. He starts by putting dry ice into water to make it look as if the water is a boiling sign from God. He attaches strings to pictures in Nell’s room, sets up speakers to play demonic sounds and even has a fake cross that emits smoke after the demon leaves the girls body and enters the body of the preacher in a show of sacrifice. All in all, some pretty neat tricks.

However, this doesn’t do anything. Obviously. After finishing the fake exorcism the girl appears miles away from her home in Father Marcus’ hotel room, unresponsive, and with no memory of how she came to be there. With this troubling event, Father Marcus begins to question his lack of faith and feels something sinister might be happening to the girl.

With an unknown cast this film does a pretty decent job at creating the illusion of a “real” documentary. I felt that the movie was great at portraying Father Cotton Marcus as this smug jerk preacher who just feels like he’s in the entertainment business and not in the business of saving souls. I really enjoyed the fact that the story is about a “false prophet” trying to disprove exorcisms by performing one of his own on a sick girl in front of superstitious back water folks.

Should you see this movie? Yeah, go for a date night and leave before the end. I’m not sure what happened but this movie had an awesome pace, great amounts of twists, suspense and humor and then suddenly it was brought to a halt with one of the worst endings I’ve seen in a while. So America, check it out, it’s a decent scary movie with a crappy ending.