The best picture of the year that nobody will see. Made for anyone who is lucky enough to see it. 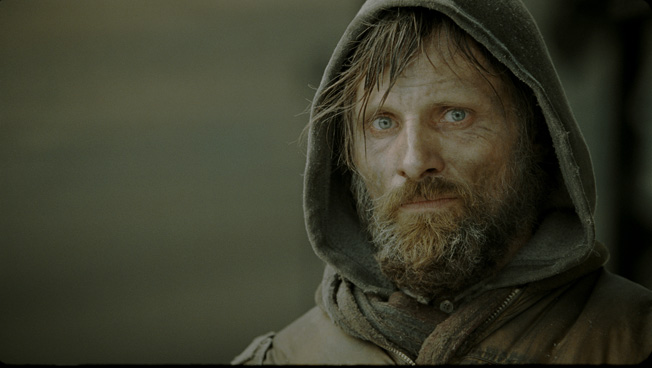 First let me get this out of the way: They don’t explain what happened to the world leaving it in the state its in. Get over it.

This film, based on a story by Cormac McCarthy, is the tale of a man
and his boy trying to survive after an unexplained cataclysmic event
seemingly destroys the planet. The father (Viggo Mortensen Eastern
Promises, Hidalgo) is struggling to keep his son alive in a place where
very few decent human beings are left. He and his son (Kodi
Smit-McPhee) trek across country heading south
with little hope of finding food or shelter. With no knowledge of
anything going on everywhere else in the world, we follow these two on
their journey where they encounter what you would expect in such
conditions: bandits, cannibals, and creepy almost-zombie people. The
world sucks.

This movie is near perfect. We get powerhouse
performances from everyone in the movie from Viggo Mortensen to a
barely recognizable Robert Duvall. Another noteworthy performance is
the always great Charlize Theron, who is in the movie less than 10
minuets but delivers a powerful performance. This movie’s somber tone
is visually accessible through director John Hillcoat’s use of grey
colors. This film is dark and very cold. Every landscape looks like is
been burned and frozen for 50 years. It almost makes you feel cold
watching it.

The movie
moves at a good pace, with intense action scenes blended with wonderful
dramatic scenes. Without the acting prowess of Viggo Mortensen this
movie just wouldn’t work. He is comparable to Tom Hanks in Cast Away.
Both actors physically took the challenge to look the part. Tom Hanks
took time to bulk up for Cast Away and Viggo Mortensen lost a ton of
weight to look the part of a broken starving man. Without a lot of
dialogue Viggo provides plenty of emotion worthy of a Best Actor Nod.