Rated R for sequences of strong/bloody violence, language, and some sexual material. 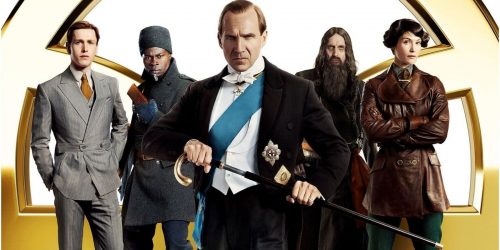 After two years of delays, Matthew Vaughn’s The King’s Man is finally coming to theaters. Originally scheduled for November 2019, it was slated for February 2020, and we all know what happened to the world at that point. Whether the wait was worth it depends on audience expectations. Vaughn provides the same dashing heroics as The Secret Service and The Golden Circle, but without a single member of the original cast — this is a prequel after all — we get some mighty fine brickwork laid for the franchise, while he puts his own stamp on history revisionism to boot. Anyone who’s seen the first two films — or enjoys Vaughn’s line of filmmaking — are in for a jolly good treat.

It’s 1902 in South Africa and Orlando Oxford (Ralph Fiennes) of the Red Cross has just arrived, but not before all hell breaks loose and his wife Emily (Alexandra Maria Lara) is killed in front of their son, Conrad (Alexander Shaw). Twelve years later, Orlando is still grieving, while the now-grown Conrad (Harris Dickinson) just wants to go to war. Soon enough, a dastardly plot gets set in motion, masterminded by some of history’s most nefarious villains — Rasputin (Rhys Ifans), Mata Hari (Valerie Pachner), Erik Jan Hanussen (Daniel Brühl), Gavrilo Princip (Joel Basman), and Dupont (Todd Boyce) — to not just assassinate Archduke Franz Ferdinand of Austria (Ron Cook), but also wipe out millions during the Great War.

Eggsy and Harry’s exclusion may be felt throughout The King’s Man, but Vaughn goes straight prequel route and sets things so far removed that it manages to stand on its own. With the third entry “proper” set to start filming in the near future, don’t worry fellow Kingsman, they shall return. In the meantime, prepare to delight as Fiennes, Dickinson, Djimon Hounsou, Gemma Arterton, and even Ifans Kick-Ass, err… kicks ass and takes names. The runtime may start to feel a little stretched, and there’s a good chunk that gives one the feeling of 1917 deja vu — maybe it’s a good thing it got delayed — but when The King’s Man is running at high speed, it’s the most fun you can have at the movies this side of the multiverse.