The perfect escape for adults looking to beat the summer heat and 'splosions. Made for art house fans who know what they're getting into.

Rated PG for thematic material, brief language and some smoking. 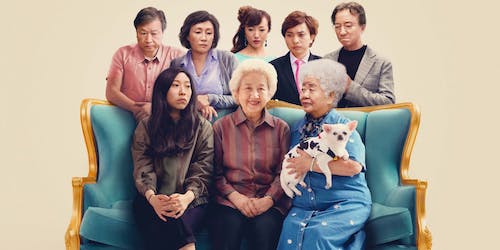 When you skip the Sundance Film Festival you get stuck playing catch up the rest of the year. Thankfully, some of the best films wind up finding distribution and make their way to theaters. And writer/director Lulu Wang’s family dramedy, The Farewell, is about as Sundance-y as they come. Full of laughs and heart — along with a very specific worldview — her amazing cast help keep the film moving along, even if it beats to an all too familiar Sundance pace. It also provides a chance for Awkwafina to finally prove she can be more than just a snarky sidekick.

Billi (Awkwafina) loves her grandma Nai Nai (Shuzhen Zhou) very much. They spend lots of time talking on the phone while Nai Nai deals with her exhausting husband in China and Billi wanders the streets of New York. What Billi doesn’t know — and neither does Nai Nai — is that Nai Nai has terminal lung cancer. Now, the family plans a trip to China to visit Nai Nai before she’s gone, using the excuse of a wedding so they can all spend some time before their final goodbyes.

It’s hilarious watching Wang’s amazing cast walk extra lightly on eggshells with Billi being the one person they worry will ruin the whole thing. Nai Nai just shouldn’t be bothered with something that will upset her. The entire premise may seem absurd on the surface, but it’s driven home a few times that this is just how things are done in the East. Awkwafina walks a fine line providing plenty of laughs, but Wang also knows when to reel her in. There’s a big moment where Billi discusses the loss of her grandfather that particularly hits hard considering a recent personal loss.

The Farewell sails along with the help of one of the year’s best ensembles by offering plenty of insight into just how far a family is willing to go to keep a secret. And at least they go so far as to acknowledge that something like this would be illegal here in the U.S. There are just as many touching moments as there are laughs — it’s never too silly or too overdramatic. The Farewell is perfect counterprogramming to the summer onslaught offering adults something more than ’splosions and CGI. It’s also nice to see something that feels 100% authentic (and coincidentally 100% fresh on Rotten Tomatoes) — most of the film is subtitled. So for those looking for something a little more real this summer, this is the perfect option.