The Curse of La Llorona

Boring, cliched, and tedious. Made for anyone scared by loud noises, breaking glass, and yelling.

Rated R for violence and terror. 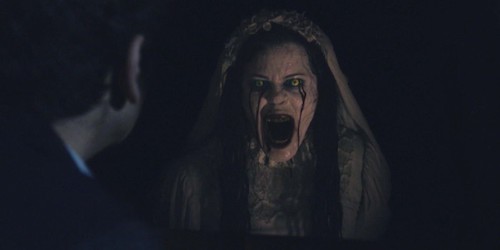 With James Wan moving on to billion dollar blockbusters, his beloved Conjuring universe is feeling the lack the of his presence. Cracks were already showing in the formula with his own Conjuring 2, but The Curse of La Llorona is even worse than the first Annabelle. Director Michael Chaves takes what should have been a super creepy scarefest and turned “The Weeping Woman” folktale into another boring, clichéd, screaming banshee flick. If you consider loud noises scary — and there seemed to be plenty in the theater — then La Llorona could work. For the rest of us, it’s just another exercise in horror movie tedium that barely connects to the Conjuring universe.

In Mexico, 1673, La Llorona (Marisol Ramirez) has discovered her husband’s infidelity and drowns their children in the river. Two hundred years later in 1973, Anna Tate-Garcia (Linda Cardellini) is a Child Protective Services case worker sent to check in on Patricia (Patricia Velasquez) and her two boys, Carlos (Oliver Alexander) and Tomas (Aiden Lewandowski). But what Anna doesn’t know is that Patricia has locked her boys in the closet to keep them safe from La Llorona. Now, she’s unleashed a force upon herself and her own two children, Chris (Roman Christou) and Samantha (Jaynee-Lynne Kinchen). They are forced to take the advice of Father Perez (Tony Amendola) and call upon unorthodox curendaro Rafael (Raymond Cruz) to save the day.

The Curse of La Llorona is the kind of horror film that relies on characters working overtime to do stupid things. Like taking baths alone, not calling out for help, or just doing exactly what they literally know they shouldn’t do. For instance, Samantha has already been attacked by La Llorona once, yet when La Llorona tries to drown her in the bathtub, all she does is wearily look around the room to see what’s going on instead of simply getting out of the bathtub or even calling out for her mom.

I was really rooting for La Llorona to be better than the TV spots made it look. But sadly, what you see is what you get. It’s 93 minutes which feel like an eternity. There’s even a waiting montage. That’s right, screenwriters Mikki Daughtry and Tobias Iaconis have characters sitting around simply waiting for La Llorona to show up and yell at them. There’s also a really dumb pseudo-twist toward the end that’s hilarious and Cruz feels like he’s stepped in from a completely different movie filming down the street.

Lots of friends have asked me about this as they’ve been told the story growing up and it scares the hell out of them. But there’s nothing here that’s going to scare audience members the way an abuelita can. Telling ghost stories around the campfire is more frightening than anything that happens in The Curse of La Llorona. The real curse here is the movie itself while the scariest thing is that Chavez is in charge of The Conjuring 3!