Won’t go down as the worst McCarthy vehicle, but keep expectations in check. Made for hard-pressed McCarthy fans only.

Rated R for sexual content, language and brief drug use. 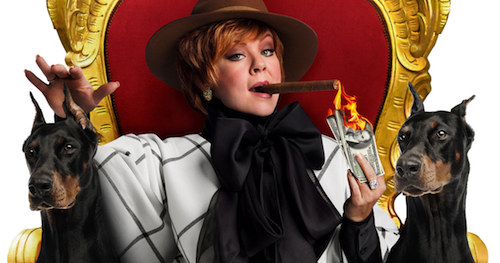 Melissa McCarthy may have as many detractors as fans, but at least she’s usually reliable. Even under the direction of her husband Ben Falcone. The last time they were both responsible behind the camera, we wound up with the atrocity, Tammy. Thankfully, Falcone learned at least a few things from that debacle and the two — along with co-writer Steve Mallory — have made The Boss a far more watchable movie. While still not the laughfest we hope for, at least this one has a half-decent plot and some heart to make the crass go down a little easier.

In 1975, 5-year-old Michelle Darnell (Chandler Head) is returned to the orphanage. After Michelle is returned two more times at age 10 (Vivian Falcone) and 15 (Isabella Amara) before finally declaring that families are for suckers. Cut to the present and Michelle is a rich global phenomenon with her company overseen by single-mother/workaholic Claire (Kristen Bell) who finally grows the balls to ask for a raise. Meanwhile Michelle’s ex-lover/rival Renault (Peter Dinklage) wants revenge by getting  Michelle arrested for insider trading, all because he got passed over on a promotion.

Four months later, Michelle is out of prison and seeks sympathy from the one person who just may pity her enough to let her crash on the couch: Claire. After Michelle makes herself at home, Claire’s daughter Rachel (Ella Anderson) introduces her to Claire’s “holy shit” brownies. Michelle decides they should go into the baking business and Darnell’s Darlings is born. Little do they know, that Renault will stop at nothing to steal Michelle’s newfound empire.

For a comedy, there’s surprisingly way more plot than you’d expect. And therein lies part of the problem. Too many stretches with not a whole lot going on.. Characters interact and you can tell that something is supposed to be funny, but you simply stare at the screen and wait for something, anything to happen, before it finally does. And when it does, sometimes it’s gut busting, or at least worth laughing over. McCarthy could use some stronger comedic costars. Bell does what she can, but always gets overpowered while Dinklage gives another horrible comedic turn. He’s every bit as awful here as he was in Pixels where he was also the worst thing about that movie.

The worst thing about The Boss is that even running a scant 99 minutes, it feels way longer than that with too much padding. The dull stretches are like watching paint dry. They’re just going through the motions while we’re stuck waiting for Michelle to land another punchline. The R-rating is warranted, of course, but McCarthy isn’t just spouting f-bombs as if they’re the joke.

The Boss won’t go down as the worst McCarthy vehicle — Tammy is still the reigning champ — but keep expectations in check. With enough laughs to at least warrant a matinee, this is far from the hilarity levels of her Paul Feig glory days of Bridesmaids, The Heat, and Spy. Fingers crossed they can keep the magic alive with this summer’s Ghostbusters! As for Falcone himself, at least his films are getting better. Best of luck on the next one, we just might finally be shouting “holy shit” ourselves.