Hilarious, cute as a button, and smarter than marketed. Made for families who can give in to the film's charms and jokes — even if there may be more poop jokes than needed. 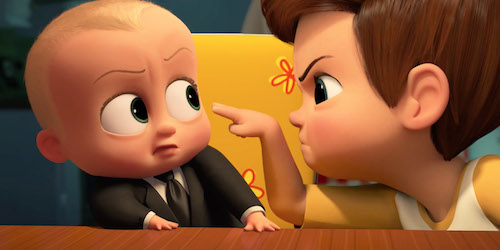 In a change of fate for the Star Trek franchise, the rule of thumb used to be that the even films were superior to the odd. With the new timeline, it appears that the odd films fare better. What does this have to do with The Boss Baby? For director Tom McGrath, the old saying holds true. His first Madagascar was a fun little romp for DreamWorks which McGrath then continued to drive into the ground with two sequels. In between, he squeezed out the hilarious Megamind and now The Boss Baby. Don’t let the marketing fool you, this is one of the more hilarious — and cutest — films of the year so far. While there’s bound to be something far better coming down the pipeline — all eyes on Pixar’s Coco — for now, this is a surprise no one anticipated.

Adult Tim (voiced by Tobey Maguire) introduces us to seven-year-old Tim (voiced by Miles Christopher Bakshi) who lives for adventure. An only child, he does what he can to live life to the fullest. Imagination is his middle name and exploration is his game. Until the day the Boss Baby (voiced by Alec Baldwin) shows up to steal the spotlight. Decked out in sunglasses and a designer suit, Boss Baby proves he’s not here to play games. Turns out, Boss Baby is literally on a mission and comes from a long line of adults in baby bodies. He’s here to stop the scheming Francis Francis (voiced by Steve Buscemi) from unleashing a new line of pets upon the world to end the battle between babies and puppies: the “Forever Puppy!” Now, the two must set aside their “sibling rivalry” to keep the world safe for cute bouncing babies.

McGrath is in a wheelhouse he’s very familiar with tossing every joke he can think of at the audience. It helps that writer Michael McCullers (Baby Mama, both Austin Powers sequels, and Undercover Brother) knows how mix crude and cute better than most. With a dash of smart to go along with it, there’s something for everyone to enjoy with The Boss Baby. The cast — especially Bakshi and Baldwin — sound cute together, even if Jimmy Kimmel and Lisa Kudrow as Mom and Dad aren’t able to score as many laughs as they should. But this isn’t about them, this is the Tim and Boss Baby show and the two lay on the hijinks better than most live-action duos. While the pacing does get a little bogged down as the third act sets up the finale with some out of place tearjerking, it never gets in the way of the laughs.

The only misstep is a preggo plot hole. At the beginning of the film, Mom is pregnant and they mention that Tim is going to be a big brother, next thing we know, the Boss Baby shows up getting out of a taxi after an extended opening credit sequence showing us where the film’s babies come from. Basically they’re manufactured babies who either go to loving families or are stuck in a pseudo-heaven where they’re permanently pint-sized thanks to a magical formula that keeps them young forever. It’s a throwaway plot point seeing how the film skirts right by it. While some of us may wonder whatever happened to Tim’s real sibling — spoiler alert: Boss Baby gets back into a taxi and leaves — kids will never notice and even you may forget. The Boss Baby has one goal in mind and it’s tickling the funny bone. And that alone it makes it worth seeing in spite of the awful advertising.