Takes itself more seriously than most family fare, but still knows how to show you a good time. Made for families looking for some fun! 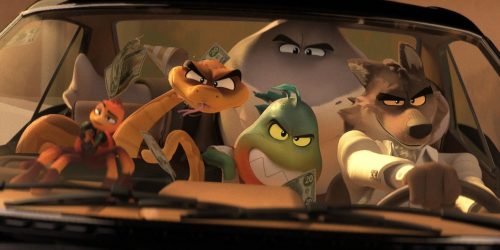 As many hits as DreamWorks has had, there’s been just as many stumbles along the way. So when they finally release a film that’s even slightly original — yes, The Bad Guys is based on the Aaron Blabey children’s book series (he also executive produces) — it’s a cause for celebration. Even taking a property such as Trolls became an unexpected delight full of hilariously weird anarchy. With director Pierre Perifel making his feature debut such a rousing success — and 15 books to mine material from — DreamWorks should have another hit franchise on their hands.

In Los Angeles, humans and animals co-exist, but “The Bad Guys” are the most notorious gang of criminals around. Mr. Wolf  (voiced by Sam Rockwell) leads his ragtag group of misfits — including Snake (voiced by Marc Maron), Tarantula (voiced by Awkwafina), Shark (voiced by Craig Robinson), and Piranha (voiced by Anthony Ramos) — with a rule of “go bad or go home.” So when the chance to steal the most prized possession, the Golden Dolphin Good Samaritan Award, presents itself, the team comes up with a fool proof plan.

When everything goes awry, Professor Marmalade (voiced by Richard Ayoade) convinces Governor Diane Foxington (voiced by Zazie Beetz) to let him try to perform an experiment. Professor Marmalade wants to prove that he can turn the bad guys into good guys, but anyone should know that anything that looks too good to be true will always come with its own set of twists and shenanigans.

If there’s one film that The Bad Guys feels similar to, it’s Zootopia. And not just because of the anthropomorphic animals, but because it feels like an honest to goodness heist film. It even opens with DreamWorks longest single take in their history and is a surprising reference to Pulp Fiction. Something that will obviously go over kids’ heads, but it’s nice to see Perifel — and screenwriter Etan Cohen (with additional screenplay material from Yoni Brenner and Hilary Winston) — making a film that literally the whole family can enjoy.

Don’t worry, it never dives into inappropriate darkness — Zootopia could be considered more intense than anything here — but it also takes its stakes more seriously than most family fare. The cast are having tons of fun, with Ramos even managing to get a chance to sing, and the pace flies by relatively quick. It may not be start-to-finish perfection, but it’s tons of fun and gets the job done. The animation style alone is praiseworthy with The Bad Guys having a look all its own. With families being able to venture out to theaters again, this one is well worth the trip.