Adam McKay crafts another hilarious line of gags in his new satire of the buddy cop genre. Made for will Ferrell fans. Adam McKay fans. And any movie-goers that are fans of hilarity.

Rated PG-13 for crude and sexual content, language, violence and some drug material. 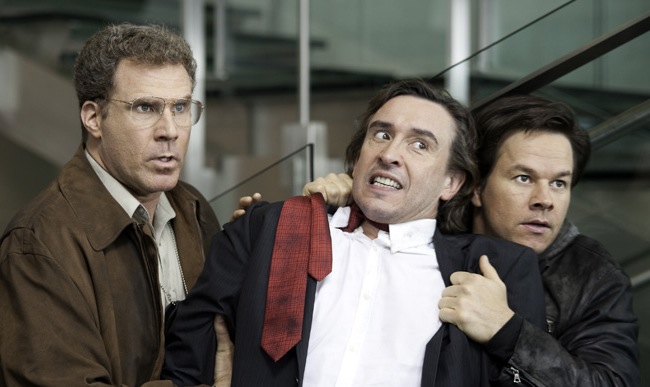 There’s those amazing, do-everything cops you see on TV that get to burst into building guns blazing, drive cars through public property destroying everything in their path, and end up getting medals for all the damage they caused. Then there’s The Other Guys, who have to sit around all day in the office doing paperwork, worrying about how much coffee is left in the office pot, and how they’re going to make it through another day with such mundane tasks filling up their schedules. These are the guys you don’t want to be, if that wasn’t clear enough.
The Other Guys features two cops, Detectives Highsmith and Danson, who ooze machismo from every pore in their body. They’re played by Dwayne “The Rock” Johnson, and Samuel L. Jackson. Is there a more perfect pair of guys to play a couple of cops who don’t give a crap about any of the rules? Who fly by the seat of their pants, wreck entire cities, and look good doing it? I for one can’t think of a better pairing.

Isn’t that how most cop movies play out? A crime-fighting duo that never plays by the book, like Will Smith and Martin Lawrence in Bad Boys, these guys don’t care much for human life, they only care about getting the job done. This is evidenced when they drive their police car into the middle of a double-decker tour bus full of people. Good thing there were no people in the middle of that bus right where the car landed. Or was there? I think that’s what Adam McKay is trying to say. Remember that time in Bad Boys 2 where our lovable cop buddies, played by Smith and Lawrence, drove a Hummer through a shanty town most likely killing hoards of people and ruining hundreds of homes, but it was cool to look at so we accepted it?

After Highsmith and Danson take a running leap off a tall building and in pure action-movie opposite-world don’t end up walking away unscathed, it’s time for a new pair of cops to take charge of the office. Detective Terry Hoitz (Mark Wahlberg) would like it to be him, but his desk-job-loving partner Detective Allen Gamble (Will Ferrell) would much rather sit in the office and do paperwork all day. Coming off a scary, and highly publicized shooting incident where Hoitz unfortunately shot someone he shouldn’t have (I won’t spoil it here, not knowing is half the fun) he’s been confined to a desk. He can’t stand Gamble who loves his desk and loves filling out bureaucratic paperwork. What cop loves doing paperwork?

Director Adam McKay crafts a hilarious riff on the buddy-cop genre. His writing is biting and his satire points out common hilarities we see but don’t notice when it comes to these types of films. When a storefront explodes it sends Gamble and Hoitz to the ground, unable to move. Gamble finally utters the sentiments we’ve been feeling for years. How exactly do action heroes walk away from explosions without even flinching? That’s a great question.

The Other Guys almost buckles under the weight of its convoluted plot (even by action movie standards), which it spends far too much time explaining who is who and why they are doing what they are doing, seemingly all in some slightly misguided attempt to comment on the evils of American capitalism. This becomes much more evident as the credits roll and we see data, figures, and charts about what kind of ridiculous money Wall Street fat cats are making. We understand McKay has beef about how big business is run, but why muck up the funniness of his movie with it?

In the end McKay’s Other Guys is full of well-placed jokes, a hilariously understated Wahlberg, and a whole lot of genuine laughs. It may not be the perfect satire of the buddy-cop genre that Hot Fuzz was, but it certainly calls our attention to most of the unreal and ludicrous things we see happen in action movies by throwing the proverbial satire-laced book at them.