James Cameron returns to further the story he started 35 years ago. But where do we go without Skynet? Made for 'Terminator' fans who have been waiting to see what it would be like with Cameron's return.

Rated R for violence throughout, language and brief nudity. 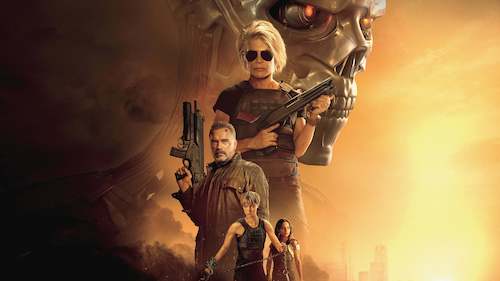 It’s almost exasperating to think that Terminator: Dark Fate is the sixth entry of the franchise. But that’s really not too many considering the first film turned 35 this year. It’s also been 28 years since T2: Judgement Day blessed us with not only one of the best action films ever made, but also one of the best sequels.

With Rise of the Machines, Salvation, and Genisys not having James Cameron involved, it was about time he made his return — even if only credited with story/producer. And while director Tim Miller (the first Deadpool) may not quite have Cameron’s eye for action, Dark Fate is absolutely the best sequel since T2. An ironic statement considering they’ve scrapped the last three films from canon and, err, rebooted.

1998, Livingston, Guatemala. Sarah Connor (Linda Hamilton) and her son John (Edward Furlong) are trying to live their lives knowing the future is safe after taking down Skynet’s Cyberdyne System and preventing Judgement Day. But just wouldn’t you know it, the Terminator (Arnold Schwarznegger) shows up to complete his mission and finally kills John.

Twenty-two years later, enhanced super soldier Grace (Mackenzie Davis) arrives in Mexico City from a new future in 2042. Grace is on the hunt for Dani Ramos (Natalia Reyes) to keep her safe from the a new liquid Terminator, Rev-9 (Gabriel Luna). Grace and Dani head out on the run, but not before Sarah catches up with them. Now, the three are on the run to save Dani — and whatever new future is heading their way — with Grace informing them that a new machine war is still coming, in the form of “Legion,” as history begins to repeat itself.

Considering Dark Fate takes place in the present, it makes sense for the film to have a self-aware sense of humor. Screenwriters Davis S. Goyer, Justin Rhodes, and Billy Ray make sure Sarah and Dani understand the ridiculousness of their situation — especially with Sarah having already lived through it once.

They also add a heaping dose of girl power, with Hamilton, Davis, and Reyes performing spectacularly. All three are a powerhouse of badass, which I’m sure everyone knew was key, considering Schwarzenegger doesn’t even show up until the last half of the film.

But that’s exactly what makes Dark Fate work best: the humanity. Here we have three women being tracked down by a machine from the future, working together to save themselves. It brings us back to the original’s simplicity without getting too bogged down in time traveling shenanigans. It’s the biggest thing missing from the last three sequels and it’s about time they brought it back.

Say what you will about Cameron as a storyteller, but you do have to admit that he usually takes the time to build characters, no matter how much spectacle is being played out around them. Speaking of spectacle, don’t worry, there’s more than enough of that here too! The film charges right out of the gate at a breakneck speed and runs like a freight train toward the finale.

While squeezing in more than enough character arc for Dani, by the time we reach the end credits, you can’t help but wonder where this sequel has been all this time. The answer is obviously Cameron. This was always his story to tell, and it’s about time he got to continue.

Now, don’t get me wrong, I love the Terminator franchise as a whole — yes, even 3, Salvation, and Genisys — but things will undoubtedly be far more interesting moving forward with Dani and Sarah prominently in the leads and it’ll be exciting if we get to see whatever Legion winds up being. Don’t expect any clues during the end credits, there are no stingers.

To feel like a broken record about the Terminator franchise: I’ve said it before, and I’ll say it every time, I can’t wait to see where it goes from here.