We all know he’ll be back, and I can’t wait to see where the story goes from here. Made for 'Terminator' fans who aren't afraid of the filmmakers having some fun with the timeline. 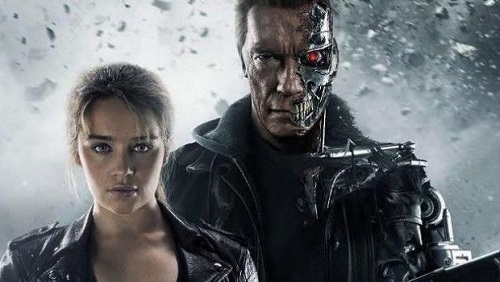 When it comes to diminishing returns, the Terminator franchise has been no exception. While I still have a soft spot for both Terminator 3 and Terminator Salvation, I know neither of them come even close to the greatness of James Cameron’s original classic and sequel. When a new installment was announced, I wasn’t too sure they could come up with anything new. Then, they announced that Arnold Schwarzenegger would be returning and it finally piqued my interest. When it was released that it wouldn’t be a reboot, I changed my mind. There’s no remaking Cameron’s films.

Thankfully, what director Alan Taylor (Thor: The Dark World) has done with Terminator Genisys, is taken the timeline and had some fun with it — at least as much as the PG-13 rating will allow. Granted, we’re talking about a series where the titular character is a robot, so it makes sense that they can get away with a lot more without going overboard. Is the film a complete success? Yes and no. But let’s face it, just having another Terminator film in theaters is a feat all its own these days. But as Jurassic World proved just four weeks ago, audiences appreciate a little nostalgia. While it never manages to be as suspenseful as that, however, Genisys definitely makes up for it in time-traveling shenanigans.

Beginning in 2029, John Connor (Jason Clarke) has just lead the resistance against the machines to what seems to be a win — for once. They have found Skynet’s time machine and send Kyle Reese (Jai Courtney) back to 1984 to save Sarah Connor (Emilia Clarke). And just when you think you’re watching the original film, along comes a version of the liquid metal T-1000 (Byung-hun Lee) who knew where Kyle was going to be. After Sarah winds up saving Kyle, we learn that a version of the T-800 (Schwarzenegger) — whom she has named “Pops” — was sent even further back to save Sarah when she was just a kid and has been her guardian ever since. Now, John has to convince Sarah and Pops that they need to get to the year 2017 to stop the launch of a program called Genisys — a renamed Skynet — to keep Judgment Day from happening once and for all.

As with all time travel films, there are a lot of plotholes in our midst. The best plan of action is to just sit back and revel in the joy of watching Schwarzenegger back on the big screen, doing what he does best: kicking ass while cracking wise. Genisys never takes itself too seriously, and let’s face it, what franchise can when entering into its fifth installment? Screenwriters Laeta Kalogridis (Shutter Island) and Patrick Lussier (horror film editor turned trashy screenwriter/director: My Bloody Valentine, Drive Angry) know that they need to bring something new. And really the only way to do that is to scrap what’s happened before, while never forgetting the alternate timeline happened.

There are plenty of nods to the first two films, with returning characters that I don’t want to mention in hopes of keeping at least a few surprises in store. I know the marketing for Genisys has been abysmal and has given away a huge one, so even though it’s already public knowledge, I refuse to ruin it here. Featuring a game cast — Emilia Clarke makes a perfect Sarah after having rewatched the first two films just days ago and this is the most fun Courtney has ever been. It’s too bad J.K. Simmons is the only one short shifted considering how reliable he is no matter how minor the role. His character is literally dropped right in the middle of an action scene and he’s never mentioned again.

Make no mistake, you want machine-on-machine action? Taylor delivers. Terminator Genisys may not go down as one of the best action films of the year — and still leaves us wishing for more as sequelitis starts to show the series’ age — but, just as the T-800 says about himself in the film: “I’m old, not obsolete,” and the same goes for the Terminator series, something that’ll come in handy after the mid-credits scene. Here’s to hoping that the next one is even better, because we all know he’ll be back, and I can’t wait to see where the story goes from here.