Tone shifts aside, it's still hilarious. Made for schumer fans and anyone else who's longed for Hawn's return to the silver screen. 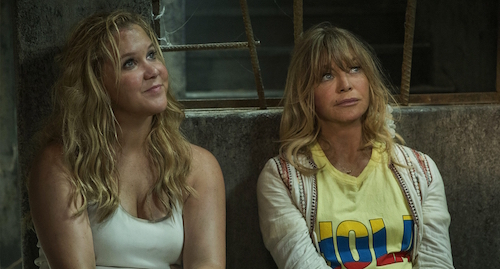 Amy Schumer (Trainwreck) may have her share of detractors, but Goldie Hawn is a downright national treasure. Pairing them as mother/daughter — and opening Mother’s Day weekend — in Snatched was a brilliant move casting wise. It’s too bad Katie Dippold’s (The Heat, Ghostbusters) screenplay isn’t as inspired. With director Jonathan Levine (All the Boys Love Mandy Lane, The Wackness, 50/50, Warm Bodies, and The Night Before) at the helm, there should have been more coherency at play. What we get instead is something that feels more like a forgotten ’80s action comedy — something along the lines of Volunteers — where it veers wildly through inconsistent tones. It never knows if it is a wacky adventure or serious mother/daughter vehicle? No one seems to know, so it’s a good thing it’s still hilarious.

Emily (Schumer) is a having a horrible day. She’s been fired from her job and her boyfriend Michael (Randall Park) has broken up with her to go on tour with his band just before they’re supposed to leave on a trip to South America. In order to not lose out on her non-refundable getaway, she talks her mom, Linda (Hawn) into joining. Soon enough, Emily thinks she’s going to hook up with James (Tom Bateman), but instead winds up kidnapped with Linda and the two are on their own to try to find a way home. Meanwhile, they’re being hunted down by the nefarious Morgado (Óscar Jaenada) with only an agoraphobic sibling at home, Jeffrey (Ike Barinholtz), annoying the U.S. government trying to get some help.

Aside from the scattershot tone shifts, Snatched is every bit as raucous as you’d expect from a Schumer vehicle. It’s a good thing she continues to surround herself with a hilarious supporting cast and a director who understands that sometimes it’s the little things that can be funniest. Plenty of verbal wordplay is at hand such as Emily asking her mom to help her put the fun back in non-refundable or Linda not hearing “welcome” correctly. Thankfully it doesn’t rely on xenophobic jokes and the women manage to become better people, no matter how forced it feels by the end.

Schumer and Hawn make a fantastic mother/daughter duo and with Schumer working on a vehicle for her to play sister opposite Jennifer Lawrence, I am crossing my fingers she brings back Hawn to play mother again. I’m ecstatic to see Hawn on the screen after 15 years and she’s still as winning as ever. Snatched may not be a slam dunk as a whole, but it never tries to be the best comedy ever. Once it finally settles into its shenanigans it starts to pick up the pace. It may have no idea how it wants to end and finally just settles on the most obvious, but the adventure is worth the laughs and this mother’s day, at least audiences weren’t assaulted with a Mother’s Day 2. That in itself may be the biggest blessing of all.