The Schumer/Apatow power-comedy combo makes for a hilarious time at the movies. Made for Schumer and rom-com fans alike and anyone looking for some raunch with their sap.

Rated R for strong sexual content, nudity, language and some drug use. 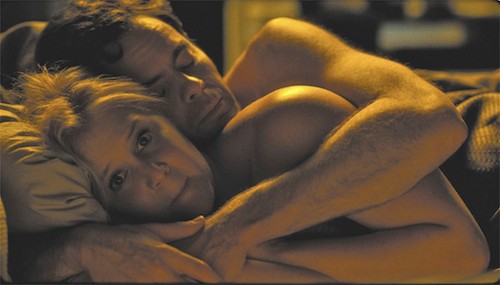 Transitioning from TV to film has to be a daunting task. I can only imagine how much harder it might be if you’re a woman. Especially in comedy. However, it comes as no surprise that Amy Schumer does it flawlessly in Trainwreck — it doesn’t hurt that she wrote it herself. And teaming up with director Judd Apatow (40-Year-Old Virgin, Knocked Up) could have been a stroke of genius, if it weren’t for the fact that the film gets mired in his excessive runtimes. Most comedies should not be more than 100 minutes. Get in, make us laugh, get out. Schumer may have higher sights than that, but the pacing is all off, in true Apatow fashion, keeping the film from being the true delight it’s trying mercilessly to be.

Twenty-three years ago, Amy’s (Schumer) parents are getting divorced. Her father Gordon (Colin Quinn) instills in her the belief that monogamy is impossible. Now an adult, Amy is a successful career woman working at a men’s magazine, with her boss Dianna (Tilda Swinton) coaching her into a promotion. Her dating life consists of endless promiscuous encounters and hard partying, the closest thing she has to a normal relationship is going to movies with Steven (John Cena), before they make it back to his place for sexy times. However, Amy may have met her match — literally — when Dianna assigns her to write an article about Dr. Aaron Conners (Bill Hader), a big time sports doctor. Now, Amy must face the challenges of arrested development and her fear of commitment if she wants to be successful both at work and her dysfunctional love life.

Good news for Schumer, Trainwreck does not live up to its title. Surrounding herself with some of the funniest people around — i.e. other comedians — and having Apatow directing never hurts. Except for the aforementioned pacing issue. I know Apatow loves his comedy/drama mashups, but there’s no excuse for how long his movies always are. With that said, it’s a good thing we love the characters as much as we do or it could have turned into another vanity project run amok. Luckily, things never venture that far. Schumer asserts herself into a starring rom-com lead admirably, and throws most of her inhibitions out the window. Something that won’t be a shock for anyone who is already a fan or has seen even one skit from her Comedy Central show Inside Amy Schumer. The only real shock was finding out Swinton played Dianna. You’d never know it was her.

The biggest surprise is actually how funny Cena and LeBron James are. Absolute scene stealers, period. They both score huge laughs with their deadpan delivery. Even if the biggest laugh comes from Hader harkening back to his Saturday Night Live years in a reference to The Exorcist. Be prepared to get put through the wringer emotionally. The most susceptible to rom-coms will be in tears about three-quarters through, not that there’s anything wrong with that. Don’t worry, Schumer’s trademark wit and raunch remains intact making for some big laughs, even if they’re in shorter supply than you might think. This aspect does give Schumer a chance to shine and show that she’s more than just a comedienne.

While maybe not the masterpiece the buzz made it out to be — it sat at 100 percent on RottenTomatoes for awhile — it is certainly better than Apatow’s last two films. Fans will be pleased, the rom-com demographic will be twitterpated, and Apatow’s followers will be happy to see him back to doing what he does best. The Schumer/Apatow power-comedy combo makes for a hilarious time at the movies.