Quick, gory, and tongue-in-cheek hilarious. Made for horror fans looking for something worth their time.

Rated NR for at least gore, violence, and language if rated by the MPAA, but is TV-MA. 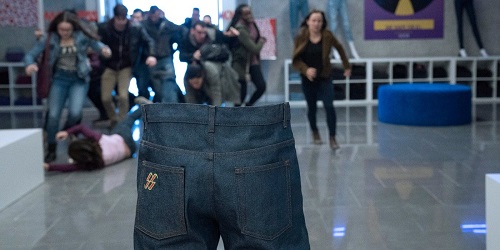 With Hollywood still mostly on hold, there’s one genre I’ve missed seeing in a theater the most: horror. As much as I love to have the howl of a crowd laughing at a new comedy, or cheering during a big superhero finale, there’s nothing more cathartic than a theater of patrons sharing a scary movie. Director/co-writer Elza Kephart’s Slaxx is clearly aiming for huge laughs over huge scares, and gets way more mileage out of its — checks notes — killer pants premise than you’d ever expect and is available to stream exclusively on Shudder.

It’s almost Libby’s (Romane Denis) first day at Canadian Cotton Company — something she’s rudely reminded of when attempting to use an employee discount but gets denied since she doesn’t officially start until 12:01 a.m. It also happens to be the night CCC launches its new line of the world’s first “gender inclusive” jeans, the “Super Shapers.” These are jeans designed to adapt to any body shape. To prepare for the Monday Madness launch, the store is on lockdown, but no one anticipates a possessed pair of Super Shapers would provide more madness than they ever dreamed.

Laughs and horror go hand in hand. Even when a horror film isn’t exactly aiming for laughs, the release of tension usually causes them. On the flip side, sometimes a film can be aiming for laughs while being too mean-spirited. In the case of Slaxx, it never takes itself too seriously. Gore hounds will find plenty to love once the pants start killing off cast members. Filled with tons of practical effects, tongue in cheek acting, and big laughs, Slaxx is a one-size-fits-all comedy/horror that you won’t want to “Karen” by the time the credits roll.