Sticks a well-deserved fork into one of the most tired genres ever. Made for rom-com lovers and haters.

Rated PG-13 for language, some sexual material, and a brief drug reference. 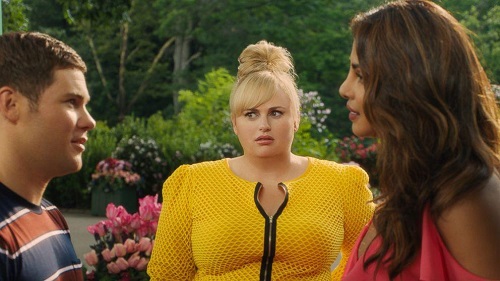 The world sometimes needs a happy go lucky film. And Rebel Wilson’s Isn’t It Romantic delivers in spades. Tackling rom-coms with plucky aplomb, no cliché is left unscathed. Irony abounds in the form of the film’s writers: Erin Cardillo, Dana Fox, and Katie Silberman. When you see a film comes from the creative minds behind The Wedding Date, What Happens in Vegas, Couples Retreat, Hot Pursuit, and How to Be Single, you can’t help but brace yourself. Leave it to them to take everything they’ve pandered to audiences over the years and wrap it up into something hilarious. The art of spoof is alive and well and they tear their own mistakes apart only to reshape them into something the rest of us can love.

Natalie (Wilson) is taught at a young age by her mother (Jennifer Saunders) that watching Pretty Woman is a waste of time and no one will ever love someone who looks like they do. Now a success architect living in New York, she’s stuck being underappreciated at work with a subordinate (Betty Gilpin) who spends her day watching rom-coms and her best friend Josh (Adam DeVine) getting put in the friend zone. But a new world awaits after Natalie is mugged on the subway, knocks herself out, and wakes up in the PG-13 rom-coms she hates so much. Now, she has to defeat the cliches and win the love of her life in order to wake back up and escape the new worlds he hates more than reality.

If you’ve seen the trailer you already know whether you want to see it or not. But for anyone on the fence, or who may have turned up their nose, it doesn’t set out to reinvent the wheel, but damn if it isn’t hilarious from start to finish. Wilson holds the film all on her own, but is given plenty of help from her costars. Liam Hemsworth gets lots of mileage out of aping his brother Chris’s hilarious turn in Ghostbusters. Hey Hollywood, cast them together already! Wilson and DeVine even continue to be charming together here, even after two Pitch Perfect outings. Director Todd Strauss-Schulson continues to keep the laughs flowing with a scant 88 minute runtime. Full of big laughs, and a big heart, Isn’t It Romantic breaks formula while giving it a huge bear hug and makes sure even the most cynical have plenty to ooh and aah at.