A hell of a lot of fun. Made for disaster-porn junkies and anyone wanting to see "The Rock" in action.

Rated PG-13 for intense disaster action and mayhem throughout, and brief strong language. 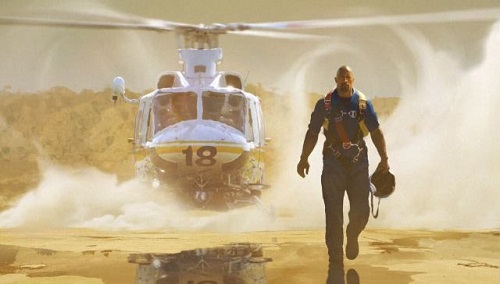 The disaster genre needs no introduction. While some films  are definitely better than others, when done right, they can be just the sort of harrowing escapism we need. In the case of San Andreas, it helps to have a director surprisingly up to the challenge. Brad Peyton doesn’t seem like the right fit at first glance having only directed the dismal sequels Cats & Dogs:The Revenge of Kitty Galore and Journey 2: The Mysterious Island. But, Peyton reteams with star Dwayne Johnson (see Journey 2) to rock theaters with another nail-biting addition to the ever growing list of disaster-porn the way they’re supposed to be during the summer — see the inferior Into the Storm for how not to make one of these.

It figures that San Andreas opens with a car accident that’s right out of the Final Destination franchise. We find a damsel in distress after a young girl is blindsided by a rockslide and her car winds up in a ravine hanging from a tree branch. In flies our intrepid hero Ray (Johnson), armed with his crew of Los Angeles Fire & Rescue team. Turns out, the rockslide was only the beginning. At CalTech, Lawrence (Paul Giamatti) is working with his team of young scientists to try to predict earthquakes, taking him to Hoover Dam with partner Dr. Kim Park (Will Yun Lee). Soon enough, an earthquake destroys the dam, taking Kim with it.

Meanwhile, Ray is dealing with a disheveled home life having been served divorce papers by Emma (Carla Gugino), who’s moving in with engineering tycoon Daniel (Ioan Gruffudd). Soon, the San Andreas fault begins a string of increasing earthquakes — as opposed to the typical aftershocks — making its way to San Francisco where Ray and Emma’s daughter Blake (Alexandra Daddario) has been left stranded by Daniel. She teams up with British brothers Ben (Hugo Johnstone-Burt) and Ollie (Art Parkinson) as they try to find a way to be saved. Everyone is in a fight for their lives as they try to survive the worst day in California history.

For anyone who’s been waiting for Dwayne Johnson to go back to his true action roots, look no further than San Andreas. Filled with eye-popping special effects, and a screenplay by Carlton Cuse (Lost, Bates Motel, The Returned, The Strain) that never gets anywhere as overly convoluted or dopey as 2012, this is one of the summer’s best popcorn thrill rides. The cast all have their prerequisite moments of bravery, while being played by every day actors. The only bit of stunt casting here is simply Johnson. But who else could play this kind of larger than life hero/everyman so spectacularly? It may be with a smirk in some instances, but in a big budget disaster film, the straighter you play it, the dumber it seems.

Speaking of which, a lot can be said for the power of Giamatti, no matter the role, he’s always so damn good. Even when he’s asked by his assistant “Who should we call?” and he simply replies, “Everybody,” it may be cheesy, but coming out of his mouth, it works. As for the direction, Peyton has certainly come a long way from his previous efforts. Keeping the action moving along, while providing just enough quiet moments to make you care for the characters, San Andreas cruises along from one catastrophe to the next. It should also be noted that this is the perfect excuse to try out the DBox seating if you have an equipped theater nearby. The rock-em, sock-em action combined with the 3D CGI-wizardry puts you right in the middle of the action as the chair pummels you with excitement.

So what else is there left to say? San Andreas is a hell of a lot of fun and provides just the kind of breathtaking action to stand alongside both Mad Max: Fury Road and Johnson’s other 2015 outing, Furious 7.