Stag films & pandemics & gore, oh my! 'Pearl' gives Goth the role of a lifetime with West making good on his new blood-thirsty franchise. Made for those who loved 'X' and want to see how our new favorite villain came to be. 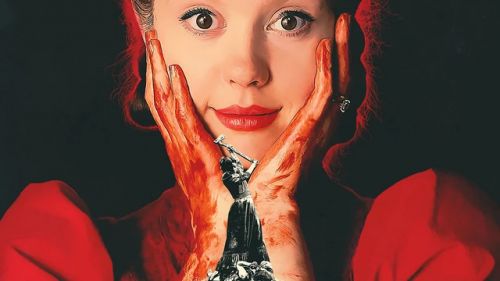 Considering how many movies are delayed — or scrapped altogether these days — it’s nothing short of a miracle that Pearl exists. Leave it to someone as resilient as Ti West to keep his films small enough that he was able to film this secret prequel back-to-back with X, delivering a one-two punch of horror in just a few months. With star Mia Goth as co-writer — returning to play a much younger version of the character — the two have expanded the world of X with Pearl’s (Goth) backstory, while making Pearl a beast to stand on its own. This is definitely a prequel that benefits, and plays better, having seen X first, and combined together, Pearl is absolutely the must see horror film of the season.

Skipping back to 1918, we find Pearl living isolated on her family’s Texas farm with her mother, Ruth (Tandi Wright), and infirmed father (Matthew Sunderland), while waiting for her husband Howard’s (Alistair Sewell) return from war. In the midst of a flu epidemic, Ruth is trying to keep everyone safe and demands masks be worn in public and to not talk to people in town while running errands. But Pearl has big dreams of becoming a big Hollywood star, and fate may have come calling when she meets The Projectionist (David Corenswet) at her local theater. He quickly introduces her to stag films, and along with a chance of joining a traveling Christmas chorus line, her ambitions are set free and no one will stand in her way.

Pearl is one of the great descents into madness. West has filled the film with every flourish you can think of from the era — even the stag film is genuine — with nomination worthy efforts all around. While it may not have the same sound design tricks as X, it more than makes up for it in score, cinematography, costumes, hair and makeup, and set design. While it may be a slow burn, there was no other way for it to reach its sinister heights. There are some wicked long takes that just refuse to look away giving Goth all the time in the world to act her guts out. I can’t wait to see more of Pearl and her bloody misadventures. West has announced a true sequel to X with MaXXXine already having a teaser trailer online.

Goth makes Pearl a force to reckon with and there’s no telling what else has happened between 1918 and 1978. Hopefully, once MaXXXine has made its way to theaters, we’ll have some kind of sequel to Pearl lined up. It would be amazing to jump back and forth between the two worlds, especially with it giving Goth so much to play with at different points in history with such drastically different characters — or so it appears so far. Guess we’ll have to wait and see what West and Goth are cooking up for us, but until then, there’s more than enough for horror fans to feast on with these two.