Armed with a game cast, clever script, plenty of jump scares, and buckets of gore, 'X' marks the spot for the year’s scariest film so far. Made for horror fans looking for something that's finally scary. 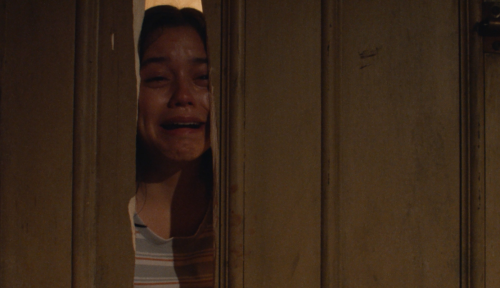 When it comes to movies — particularly horror — everything old eventually becomes new again. And one of the best directors doing this is Ti West. Most probably remember him as the guy who gets an arrow in the forehead in You’re Next, but he’s been staking his own blood-soaked acclaim behind the camera since 2005’s The Roost.

In 1975 Houston, a group of eager beaver filmmakers venture to a secluded ranch to try and make history. Director/executive producer Wayne (Martin Henderson) is dead set on making a splash in the world of adult home video and has brought along his girlfriend/star Maxine (Mia Goth), cinematographer RJ (Owen Campbell), costars/lovers Bobby-Lynne (Brittany Snow) and Jackson (Scott “Kid Cudi” Mescudi), and RJ’s “churchmouse” girlfriend Lorraine (Jenna Ortega). But while they were hoping to conduct their business under the noses of Howard (Stephen Ure), the property owner, and his wife Pearl (Goth again), they’ll find out they bit off more than they can chew when the elderly couple look to make some grisly money shots of their own.

This isn’t the first time a horror movie has brought up topic of violence vs. sex in films, and it won’t be the last, but West treats all of it with respect. What’s most interesting about X is the sadness that permeates the Pearl subplot. Goth’s Pearl performance is so deliciously mysterious that it comes as no surprise a prequel has already been filmed and getting released later this year. Ortega also continues to climb the Scream Queen ladder with another fun performance after this year’s Scream and Studio 666, and Netflix’s The Babysitter: Killer Queen.

Some may feel the third act gets too messy to fall into the divisive “elevated horror” subgenre, but X definitely has moments that make it feel like the Scream version of The Texas Chain Saw Massacre, allowing West a chance to play up the genre he clearly loves so much. There’s also some fun Psycho homages, and quick meta dialogue, along with dipping its toes in creature feature territory. Armed with a game cast, clever script, plenty of jump scares, and buckets of gore, X marks the spot for the year’s scariest film so far.