Plenty of things go bump in the night, but the house is the real star and makes you wish you could tour it. Made for del Toro fans who have eagerly awaited his return to true horror and the art house crowd looking for a visually stunning achievement. 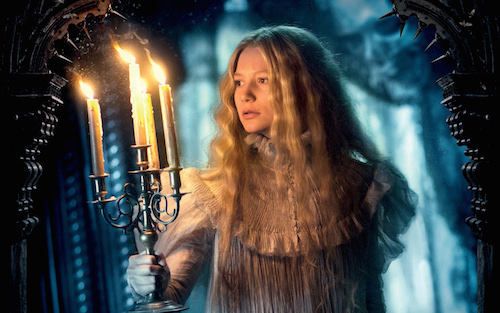 With just two horror offerings so far, this October is one for the books. Sometimes we’re lucky to get one horror movie if at all, and this year we get two — in one week! While Goosebumps is made for all ages, fear not fellow adults, Guillermo del Toro has delivered another knockout with Crimson Peak.

Loaded with breathtaking imagery, sumptuous production design, and Oscar caliber costumes, Crimson Peak may not be the most original ghost story put on film, but damned if it’s not one of the best looking. Del Toro has pulled out all the stops here and it almost feels like del Toro overload. Anyone who may have felt disappointed with Pacific Rim can rest easy. He’s right back in his horror wheelhouse where we love him the most.

There are many secrets to Crimson Peak, so let’s be brief. Edith (Mia Wasikowska) believes that ghosts are real. Especially after her mother returns from the grave when she’s a child to give warning: “Beware of Crimson Peak.” As an adult, Edith is an aspiring writer who loves the macabre. She considers herself a Mary Shelley, not a Jane Austen. However, she’s unable to publish anything without a shoehorned love story all because she’s a woman. One day, along comes the alluring Thomas Sharpe (Tom Hiddleston) who is in search of financial backing for a machine to mine red clay back at his England home, the dilapidating Allerdale Hall.

While in the midst of wooing the young Edith, her father (Jim Beaver) is murdered, she falls on Thomas for support, the two are married, and on their way to Cumberland, where Thomas’s shrewish sister Lucille (Jessica Chastain) lies in wait. Turns out, Allerdale is their childhood home, and it’s full of all kinds of aforementioned secrets and ghostly spooks—not to mention a giant hole in the roof that lets in leaves and snow. The main thrust of the story revolves around the Sharpe’s seemingly ulterior motives and Edith’s childhood friend/unrequited love Dr. Alan McMichael (Charlie Hunnam) on a mad dash to save her.

Del Toro gleefully fills every frame and second of runtime of Crimson Peak with all the necessary creatures that go bump in the night. He’s even brought along regular Doug Jones to play both Edith’s mother and Lady Sharpe, Thomas and Lucille’s murdered mother. Things get as intense as you’d expect and there are quite a few moments of gasp-inducing sequences — even a particular instance that will leave you breathless in the finale.

The cast play their characters to the hilt. Wasikowska manages to be as strong as she is 1900s’ feminine. Hiddleston gets to shine in a role where he’s not overshadowed by his better looking Marvel costars. And Chastain gets to get her hands dirty and let loose as we’ve never seen her before. But the film’s biggest star is Allerdale Hall itself. Built from the ground up for filming, if Crimson Peak isn’t nominated in most of the technical awards, there’s no justice this year.

But don’t worry, it isn’t all set design. The story is interesting enough to keep your attention through all the spectral shenanigans, and the tension never lets up. Things even get a bit kinky, something Del Toro is never one to shy away from. He dares you to watch, and your eyes will thank you. This is the year’s best horror film, period, and Crimson Peak is the one film that every self-respecting horror buff, or even artsy fartsy filmgoer, needs to see in theaters. Some horror films set out to scare with loud noises, thankfully, Del Toro knows that we deserve an experience, and that’s exactly why Crimson Peak succeeds.