There is some fun here, but the plot mechanics only cause the film to overload and misfire. Made for sci-fi junkies and Pratt fans. 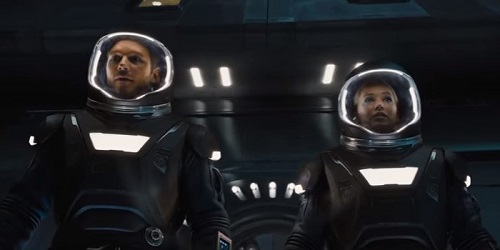 Thanks to the geek/nerd niche, sci-fi is becoming more mainstream than ever. While they can’t all be as bankable as Star Wars, there are at least two classics recently with Interstellar and Arrival. Screenwriter Jon Spaihts — with the help of love-him-or-hate-him Damon Lindelof — attempted to return the Alien series to more grounded terrain with Prometheus. And now, Spaihts is at it again with Passengers, another film this holiday season with huge plot misconceptions caused by its misleading marketing.

In the never-defined future, the starship Avalon is making its way through space to a new Earth dubbed Homestead II. On board are 258 crew members and 5,000 passengers. The passengers consist of men and women who are looking to escape Earth, which has become overpopulated and overpriced. Unfortunately for Jim Preston (Chris Pratt), his suspended animation pod has awakened him 90 years too soon. Alone for over a year — with his only friend being the android bartender Arthur (Michael Sheen) — Jim decides it’s time to wake someone up to join him in his misery. His unfortunate companion is Aurora Lane (Jennifer Lawrence), a journalist looking to write a story in which she basically time travels from one planet to another. Unlucky for both of them, they still have 89 years until Avalon arrives at Homestead II, while the ship starts to slowly malfunction around them. Now, the two must find a way to not only save themselves, but the additional 5,256 people hurtling through space.

Spaihts doesn’t necessarily take the time to fill his script with big ideas. What he aims for here is something more simplistic, albeit with a high concept plot. There are some truths to his fiction, such as suspending animation — even if it’s only currently possible for small periods of time — but the real story here is more focused on the drama. Therein lies the tug of war between writer/director. Morten Tyldum (The Imitation Game) seems far more comfortable in delivering the human drama. Unfortunately, he’s cast two of Hollywood’s biggest stars and only gets a full performance out of Pratt. He’s as reliable as ever here. As for Lawrence, we’ve seen how good, and bad, she can be. Here, she flip flops from scene to scene. When she’s clowning around with Pratt, the two have an infectious chemistry, but when it comes time for the waterworks, she fails miserably.

For those hoping to see Pratt in action, there’s several instances where he gets to play straight man, but he’s also as hilarious and likeable as always. It’s a long time before Jim wakes up Aurora — considering he’s basically stalked her for over a year, it takes a strong leading man to play this kind of Prince “Charming” — so Tyldum was smart to cast someone we don’t mind spending so much time alone with. The film’s biggest issue is when the crap hits the fan and it lurches into a pseudo action film in the last 30 minutes. Lawrence starts overacting and the plot is tied up in a pretty bow that feels like Spaihts was under the gun, came up with the easiest denouement he could, pressed his Home Depot “Easy” button, and tossed Sony his work. The special effects are at least top notch, even if the story is the weakest link here, but at least it’s not Pratt. If there’s any reason to see Passengers, it’s Pratt, and there’s more of him to see than ever (wink wink). It may not be a new sci-fi classic, but at least it’s not a complete disaster.