Expertly crafted and acted. This is the year's best film so far. Oscar watch 2016 starts here. Made for anyone who likes to think while being entertained. 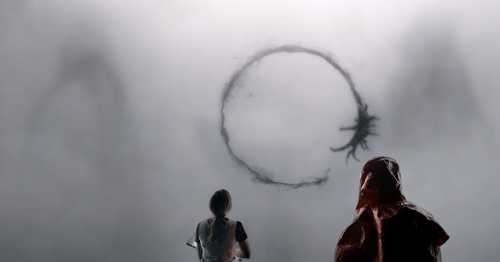 Sometimes, the year’s best film so far can come right out of left field. On paper, Arrival sounds like another drama centered around aliens finding their way to Earth. It doesn’t help that the screenplay is credited to Eric Heisserer. Earlier this year he “treated” us to one of the worst horror movies in years, Lights Out. To say the rest of his resume doesn’t look any better is an understatement: A Nightmare on Elm Street, Final Destination 5, The Thing, Hours. I suppose at least he’s familiar with genre films. Thankfully, Arrival comes directed by one of the best working today, Denis Villeneuve. After a string of dark and disturbing thrillers — Sicario, Enemy, Prisoners, Incendies — we can all take a deep breath that the pieces have really come together in Arrival.

Linguist professor Dr. Louise Banks (Amy Adams) keeps reliving memories of watching her daughter Hannah (played at ages 4, 8, and 12 by Jadyn Malone, Abigail Pniowsky, and Julia Scarlett Dan) die from cancer. As if that isn’t bad enough, a dozen alien spacecraft have just arrived, spread all across the globe. US Army Colonel Weber (Forest Whitaker) recruits Banks to head to Montana where she joins forces with theoretical physicist Ian Donnelly (Jeremy Renner) to try and communicate with the aliens and find out why they’re here. Although there’s widespread panic, there’s been no immediate threat. While Banks and Donnelly try to stop a global war, China’s General Shang (Tzi Ma) isn’t scared to make the first move.

The less explained regarding the plot and ideas Arrival throws at us the better. If there’s one thing to be said for certain is that the Oscar race officially starts here. Harkening to such sci-fi classics as Contact and Interstellar, this is far from the fireworks show we’ve come to expect thanks to Jerry Bruckheimer, Michael Bay, and Roland Emmerich. Arrival is the epitome of the thinking person’s film with huge ideas and heartbreaking drama. Adams gives a spellbinding performance as a tortured mother trying to save the world from disaster, while Renner plays second fiddle. It’s nice to see Adams back in the spotlight and as always, does not disappoint.

Villeneuve directs the entire film with incredible craftsmanship, including the year’s best score so far, from Jóhann Jóhannsson. Unnerving, unsettling, and gut wrenching are just a few ways to describe it. There’s really only so much to say when it comes to a film as amazing as Arrival. The final word is just GO! Hopefully it doesn’t get overlooked by audiences. The good news is that it arrived just in time to be at the forefront of the upcoming Oscar bait season, and with any luck, will remain at the top. It’s going to take quite the powerhouse to knock this one out of position.