'Star Wars' is back in a huge way. The Force is strong with Abrams & Co. Made for anyone living in a galaxy far, far away, or in the seat next to you. 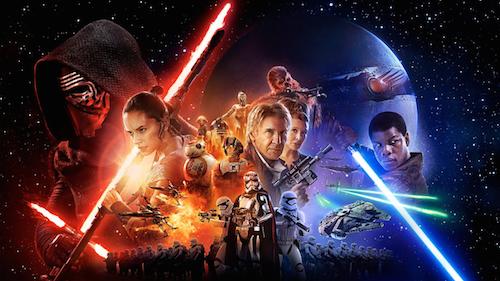 Film critics get the chance to review a lot of films. But how many happen to be called Stars Wars? OK, so the vets have had the chance to review six of them, and I bet they remember their first. And so it comes to pass, I too, get the chance to write my own first Star Wars review with The Force Awakens. While having never necessarily been in development hell, it’s been 10 years since the iconic title card and John Williams’s soaring score graced the silver screen in Revenge of the Sith. With J.J. Abrams at the helm can the rabid fanbase rest easy, or does the joke hold true that J.J. would turn out to stand for Jar Jar Abrams? Luckily, The Force Awakens lives up to the original trilogy in every possible way, leaving the prequels to mold and rot as they rightly deserve.

Luke Skywalker (Mark Hamill) has vanished! Thirty years since the fall of the Empire, a new threat to a galaxy far far away has risen from its ashes. The First Order — overseen by Kylo Ren (Adam Driver) and General Hux (Domhnall Gleeson) — are on the hunt for the missing piece of a map leading to Skywalker. Luke may have vanished, but the First Order will stop at nothing to find and destroy him. General Leia (Carrie Fisher) has sent her best Resistance pilot, Poe Dameron (Oscar Isaac) to meet with Lor San Tekka (Max von Sydow) on the planet Jakku, to get the missing piece of the map before it falls into the wrong hands. Poe is captured then freed by Stormtrooper Finn (John Boyega) and they crash land back on Jakku where Finn joins forces with scavenger Rey (Daisy Ridley). Now, the two must find safety for Poe’s droid BB-8 who holds the map piece. Aboard the Millennium Falcon they take off on the adventure of a lifetime with Han Solo (Harrison Ford) and Chewbacca (Peter Mayhew) in tow.

Oh mama, audiences are in for a treat with The Force Awakens. The biggest sigh of relief for the most hardened fans, is that Abrams hasn’t just gone and made an Abrams Star Wars movie. This is a Star Wars film through and through. From Williams’s score to the beloved sound effects, characters, and scene transitions, this is the Star Wars fans know and love. There really isn’t much to get into. There’s only so much praise you can heap upon one film, right? I mean, I guess I could dive into how much fun everyone is having back in such an iconic universe and how the new blood mix fantastically with the characters of yore and amongst themselves as well. Or how amazing the action sequences are. Or how no one will be left walking out of the theater without a big fat smile slapped across their face.

My only minor quibble is with the character of Maz Kanata (played by Lupita Nyong’o). She may be a gifted actress, but she doesn’t seem to have the requirements needed to bring a full-CGI character to life. I’ve heard her character was trimmed down immensely and sometimes less is more. She definitely sticks out amongst the rest of the animatronic/made up creatures and characters. At first I wasn’t too keen on the look of one of the main villains, Supreme Leader Snoke, but Andy Serkis can only do so much with a small amount of time. It isn’t the character that could have used a tuneup so much as the special effects which call attention to themselves until the end of the first scene Snook is in. Once something is revealed about the character I was able to let it go. This may not make sense now — you’ll see what I mean.

And speaking of which, I may have seen this with select critics in Salt Lake City, but I cannot wait to see it again with a huge audience. I will be back to see again in IMAX 3D and can’t wait for everyone I know to finally witness all the thrills, chills, and feels that I’ve been managing to keep mum on for the past day and a half. Star Wars: The Force Awakens is the biggest gift fans — and anyone else — could wish for this holiday season. It’s one of the biggest, badass rides of the year, and never disappoints for a second.