There's something for everyone — at least those who can stomach it — as Nazi zombies invade 'Saving Private Ryan.' Made for war film fans and horror fans alike. 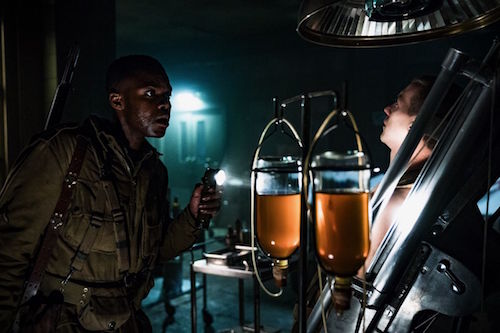 A funny thing happened on the way to the release of Overlord. When Netflix surprised everyone with their Super Bowl spot for The Cloverfield Paradox with the full film live as soon as the game was over, producer J.J. Abrams had previously announced that a fourth Cloverfield was in the can and called Overlord.

When we finally started getting trailers and TV spots, the film was still called Overlord, and Abrams reversed course saying it was not part of the Cloverfield world. As excited as I was, I couldn’t help but play Abrams’s mystery box game. I was perfectly willing to accept Overlord on its own terms — even if it was not a Cloverfield entry. And it’s a good thing, because spoiler: Overlord is not.

On the eve of D-Day, a group of paratroopers wind up stranded on their way to destroy a German radio tower suspiciously located on top of a church. Now, Cpl. Ford (Wyatt Russell), Pvt. Boyce (Jovan Adepo), Tibbet (John Magaro), Dawson (Jacob Anderson), Chase (Iain De Caestecker), and French villager Chloe (Mathilde Ollivier), are up to their elbows in Nazis and super soldiers with sinister experiments taking place below “The Church” by doctors Wafner (Pilou Asbaek) and Schmidt (Erich Redman).

For those looking for a badass Nazi zombie movie look no further. Those looking for a rollicking war-set action flick, director Julius Avery — along with screenwriters Billy Ray and Mark L. Smith — deliver on all fronts as well. There’s been a lot of hype surrounding the film since its premiere at Fantastic Fest in September, and it holds up. Overlord is the best kind of horror film genre fans love — full of exploding heads, severed limbs, and top notch action to boot!

The cast provide characters we can root for instead of just waiting for them to get picked off one by one. Cinematographers Laurie Rose and Fabian Wagner make sure the action is expertly staged and captured including an amazing version of a halo jump that feels right out of Paramount’s last big action feast, Mission: Impossible – Fallout. Jed Kurzel provides an effectively creepy score, and the special effects crew pour on the gore without it becoming too over the top.

Halloween may have been last week, but let’s face it, anytime is a great time for a fantastic horror/action hybrid. Overlord lives up to its own hype, and keeps the Abrams train chugging along. With Overlord, Get Out, and A Quiet Place, it’s a good time to be a horror fan and it’s nice to see new directors bringing a breath of fresh air to a genre that relies on dead bodies.