A funny and well-written rom-com that guys will actually enjoy. Made for fans of Jason Bateman and fresh, unpredictable romantic comedies.

Rated PG-13 for mature thematic content, sexual material including dialogue, some nudity, drug use and language. 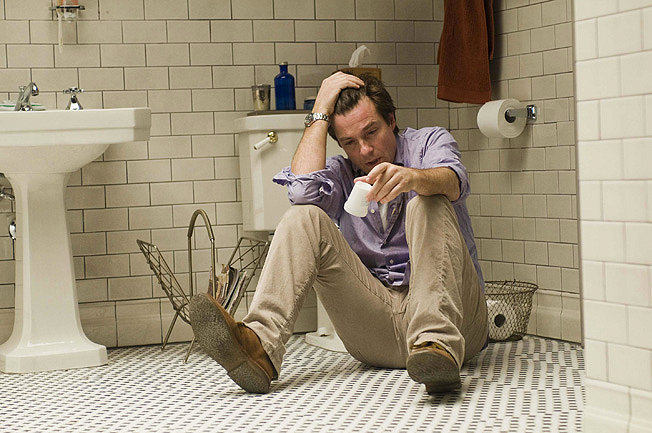 Let’s be honest. Most guys despise chick flicks. The vast majority are glamorized carbon-copies of older ones. The only reason we allow ourselves to be dragged to them is so we don’t feel guilty for forcing the girls to see so many action movies. But every once in a while a romantic comedy comes around that catches us by surprise with genuine emotion and an unpredictable story. Unexpectedly, The Switch falls into that small category.

A large factor to men actually liking The Switch might be that the central character is the male lead and not the female lead. Jason Bateman (Arrested Development) plays Wally, an uptight equities analyst whose best friend Kassie (Jennifer Aniston, Friends) is the woman he has secretly been in love with for six years. Worrying that she will never meet “Mr. Right” and have children, Kassie make the drastic decision to be artificially inseminated so she can live her dream of being a mom – regardless of having a husband or not.

As Kassie puts it, Wally is the type of guy who has “never taken a risk” in his life. He bottles things up. So when Kassie breaks the news that she is in the market for sperm and planning on having a child, Wally goes to a dark place. Being incapable of expressing his feelings, Wally disappears until the eve of her insemination when Kassie throws a fertility party at her apartment. After said party, her hippie doctor will perform the procedure in the comfort of her own home.

Even though he doesn’t want to be there, Wally knows he must attend if he is ever to have a future with Kassie. After chatting with Kassie’s obnoxious best friend (Juliette Lewis, Whip It) and meeting the picture-perfect sperm donor (Patrick Wilson, Watchmen), Wally mixes an unknown herbal drug with glass after glass of strong alcohol leaving him high as a kite, eventually ending up in the bathroom with sperm sample. Curious, Wally checks out the donation cup and when someone startles him by knocking on the door, the donor’s “ingredient” goes down the drain. There is only one way Wally can resolve the issue at hand – replace it with his own donation. Being black-out drunk, Wally recalls nothing from this evening.

After becoming pregnant, Kassie moves back home to the mid-west to have her child. Seven years later, she and her son Sebastian move back to New York City. When she and Wally decide to meet up for dinner, Wally begins to notice odd mannerisms in Sebastian – all of them being his own neurotic impulses. As Wally begins to piece together the puzzle, he is forced to make the decision to keep it a secret or leave his comfort zone in order to do the “right thing” – probably losing the girl and his presumed son forever.

The Switch opens with a subtle and somber voice-over from Jason Bateman. Usually, voice-overs are a sign of weakness in storytelling, but here it is artistic, intelligent and insightful. Just after the voice-over intro, we meet Kassie. Even though Kassie’s first scene is almost exactly like Jennifer Lopez’s in the dreadful movie with a similar story The Back-up Plan, The Switch never strays into the awful territory where The Back-up Plan lingers for its entire 106 minutes. Surprisingly, The Switch‘s story is fresh and original – nothing like The Back-up Plan. The few times it dabbles in cliche can be forgiven for its genuine nature. The comedy flows smoothly, bringing frequent laughs. Nothing ever feels forced or contrived. And the relationships between the characters are believable. Jason Bateman shows that he can play the honest romantic male lead as well as keep us constantly entertained.

Although the story description would lead you to believe that The Switch is a dirty movie made for people who enjoy raunchy comedies, know that it is not. Yes, that segment of the film isn’t exactly enticing, but it is tastefully handled with tact. And aside from that one scene that sets up the whole movie, nothing sex-related ever enters the equation again. From then out, The Switch is very much like the fantastic Ryan Reynold’s rom-com Definitely, Maybe – it is about a kid, a dad and love.

For the first time in a long time, The Switch is a chick flick that the men will enjoy just as much as the women.