Better than the trailers make it out to be, "No Strings Attached" is a highly likable romantic comedy that lags when not focusing on the relationship. Made for fans of charming potty mouth romantic comedies, Ashton Kutcher and especially Natalie Portman.

Rated R for sexual content, language and some drug material. 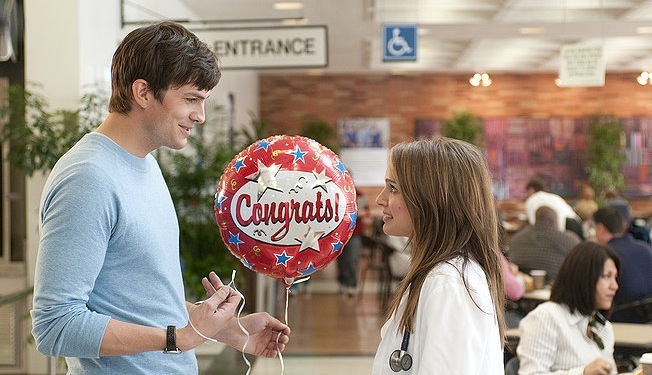 After seeing Natalie Portman give such a strong award-worthy performance in Black Swan, I was left scratching my head after seeing the first trailer for No Strings Attached. Why in the world would she choose to do such a bad-looking, raunchy romantic comedy? Upon seeing it, I realized why. One, because No Strings Attached is not nearly as bad as the trailers make it out to be. And two, to show that she can do a romantic comedy.

Emma and Adam first met at a lame summer camp 15 years ago. He tried getting physical with her, she shot him down. They ran into each other for first time since camp ten years later at a wild frat pajama party. He was wasted, she was wearing modest “sexy pilgrim” pajamas. Showing strong interest in one another, they spent the entire next day together – which just so happened to be her last day in town. Fours years after that, they bumped into each other once again at a farmer’s market. She was out with the girls, he was out with his girl – a ditzy British model. Although they exchanged numbers then, it wasn’t until another year later that he drunk-texted her upon learning that his celebrity father was sleeping with the Brit. It wasn’t until then that a real friendship began.

Both Emma and Adam are damaged souls. Emma (Portman) refuses to engage in a serious relationship because she doesn’t want the fighting and drama that eventually comes with it. Adam (Ashton Kutcher, Killers) is a rare kind-hearted guy that is down-and-out, looking for a similar kind-hearted girl to be with. Emma’s baggage and odd-houred job make dating inconvenient, so she proposes that they have a “no strings attached,” purely physical relationship. No sleeping over. No snuggling. No breakfast in the morning. No dates. No emotional connection whatsoever. The way they see it, it is “just sex.” While completely exclusive, they remain completely emotionless.

Of course, over time they each develop obvious feelings for one another. While Adam wants to change the rules and go with it, a real relationship is against Emma’s code, so it begins to cause a rift.

No Strings Attached would make a perfect PG-13 date night chick flick, but for some reason they decided to go “Judd Apatow” and make certain elements relentlessly and unnecessarily crude. The “sex buddies” aspect isn’t even what makes No Strings Attached R-rated, it’s the dialogue.

Whenever No Strings Attached strays away from Emma and Adam’s relationship, it starts to fall apart. The female cast that play Emma’s friends are perfect. They will consistently keep you laughing. But the subplots and characters surrounding Adam are a mess. His friends are hit-and-miss with their comedy. The father subplot is forgettable. Had No Strings Attached been written along the same lines as Emma and Adam’s charming relationship or her side of the story, it would have been perfect. But the non-relationship and non-Emma side of the story are just too jumbled.

Aside from That ’70s Show and a movie here and there, Ashton Kutcher has had quite an annoying career. He has been in some truly terrible films and interjected himself into far too many douchey camera commercials to not be seen as a nuisance. He always comes across as “putting on a show.” The bad has definitely out-weighted the good. But in No String Attached he rises to the occasion and matches Portman’s lovable performance. He is never annoying, whiney or fake. Instead, he is believable, charming and easy to sympathize with.

Portman has never done a romantic comedy, so it is a blast to watch her tackle and dominate the genre. Watch out Jennifer Anniston, Kate Hudson, Reese Witherspoon, Katherine Heigl, Julia Roberts, Cameron Diaz and Sandra Bullock – there’s a new girl on the block that can act circles around any of you. With absolute ease Portman makes you fall in love with her all over again – which is odd to do right after scaring you to death in Black Swan.

If you can handle a mild R-rating and are looking for a good date movie for this weekend, see No Strings Attached. It is perfectly charming, funny and completely entertaining – both Portman and Kutcher knock one out of the park.