May be the fifth installment, but the series continues to keep its hot streak going with no end in sight! Made for action fans, Cruise fans, and 'Mission: Impossible' fans alike.

Rated PG-13 for sequences of action and violence, and brief partial nudity. 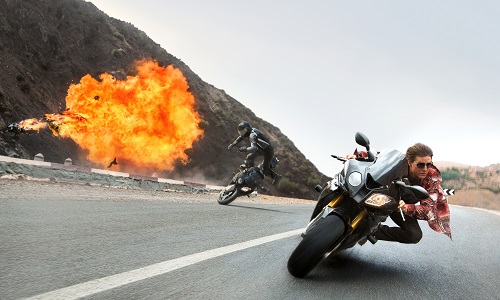 The Mission: Impossible franchise is one of few exceptions to the law of diminishing returns. While audiences weren’t quite sure how to respond to the first big screen adventure of Ethan Hunt (Tom Cruise) and his Impossible Missions Force (IMF) cohorts, the series finally hit its stride when J.J. Abrams took the reins for the third installment. After the results of Abrams’s III and Brad Bird’s even better Ghost Protocol, writer/director Christopher McQuarrie — reteaming with Cruise after Jack Reacher — had some mighty big shoes to fill. His mission, should he choose to accept it: deliver Rogue Nation as not only another notch on the series belt, but one of the summer’s, and year’s, best action films, period.

In Minsk, Benji Dunn (Simon Pegg) is trying to keep a load of VX nerve gas from getting into the wrong hands. Lucky for him, Hunt manages to be right where he should, in the spectacular, highly-advertised stunt involving him hanging off the side of a plane. Back on the homefront, Hunley (Alec Baldwin) manages to get the IMF dissolved and taken over by the CIA. In London, Hunt is gassed and taken prisoner by Solomon Lane (Sean Harris) — the creator of the anti-IMF group known as “The Syndicate” — but is aided in his escape by Ilsa (Rebecca Ferguson), a British operative. Hunt is now on the run from the CIA and The Syndicate in a cat and mouse game the likes they’ve yet to see. Now, Hunt’s only hope for saving their name and stopping Lane is with the help of Benji, Brandt (Jeremy Renner), and Luther (Ving Rhames).

When it comes Mission: Impossible, we all know each installment sets out to one up the previous. Whether breaking into the Vatican or blowing up the Kremlin, there’s no set piece that won’t leave you breathless, anxiously awaiting the next. Which is where some members of the audience may find fault in Rogue Nation. While keeping its promise on expertly choreographed and elaborate action scenes, McQuarrie has instilled this installment with more of a throwback cat-and-mouse feel, relying on tricks of the trade and quick thinking of the characters more than just blowing stuff up.

Don’t let that last bit of information fool you. Rogue Nation is top notch popcorn entertainment, but you rarely know where the story is headed, offering plenty of surprises along the way. The action scenes are guaranteed to leave you breathless — including an extended underwater sequence that Cruise, in order to film, trained to hold his breath for six minutes! And the globetrotting takes us from Minsk to London to Havana to Casablanca — we wouldn’t expect anything less than plenty of exotic locales.

After Kingsman, Spy, and now Rogue Nation, it’s a good year to be in the spy business. Guess we’ll see how the year closes out with The Man from U.N.C.L.E. and James Bond’s Spectre, another series returning to its roots storywise, finally introducing Bond’s arch nemesis. And the best part is that none of them take themselves as seriously as most. A good wink at the audience goes a long way in making sure the filmmakers strike the right tone, so things never get quite as gritty as the Bourne series, yet deliver across the board in every other aspect. There are even some fun nods to previous installments. Be on the lookout for a rabbit’s foot that comes in mighty handy.

Unfortunately, Rogue Nation still doesn’t quite get its antagonist right. Sean Harris is a fantastic actor, but is oddly miscast as the head of such a deadly organization as The Syndicate. It’s never a good sign when you can’t understand half of his dialogue, especially when it comes time to make threats against our heroes. Thankfully, the rest of the cast more than make up for it. Renner continues being the straight man to his band of IMF misfits, while Pegg keeps the laughs coming. Ferguson is a spectacular addition to the group with her shifting allegiance always in question, leaving Rhames just trying to keep up with everyone when he’s not comfortably sitting behind a computer screen. Baldwin in particular is a lot of fun as he makes life hell for the disbanded group as the perpetual thorn in their side.

Mission: Impossible – Rogue Nation may be the fifth installment of a franchise based on Bruce Geller’s nearly 50-year-old TV show, but the series continues to keep its hot streak going. The ever changing directors undoubtedly add to keeping the flavor fresh, so it’s going to be interesting to see who fills the chair next. The sky seems to be the limit, with no end in sight. Hopefully we don’t ever see Ethan Hunt and his crew subjected the regions of space. That might be taking things a little too far. If any series was going to find a way to pull it off though, it would be Mission: Impossible.