Just when we think we’ve seen it all, Cruise and company accomplish the impossible and prove we ain’t seen nothin’ yet! Made for cruise fans, 'M:I' fans, and anyone looking for more brains with their action.

Rated PG-13 for violence and intense sequences of action, and for brief strong language. 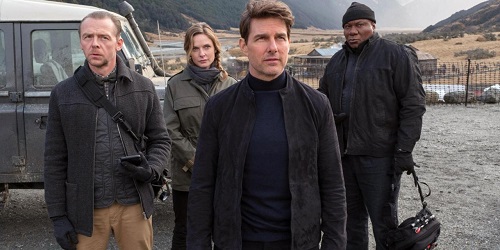 No franchise has progressively improved as much as Mission: Impossible. While off to a rocky start — let’s face it, J. J. Abrams’s M:I3 was basically a reboot — continuity has held the series together. Each installment may be a sequel, but it’s one continuous story arch now. With writer/director Christopher McQuarrie returning — the first to do so — Mission: Impossible – Fallout is definitely the best film in the series, beating his own Rogue Nation and leaving Brad Bird’s Ghost Protocol in the dust. Hyperbole, you ask? Just you wait!

Ethan Hunt (Cruise) has just accepted his mission while in Belfast. The Syndicate is in a panic after the arrest of Solomon Lane (Sean Harris) and a group labeled “The Apostles” are looking for a man named “John Lark.” Lark has joined forces with the missing Debruuk (Kristoffer Joner) who are going to use three plutonium cores to wreak havoc across the globe.

Now, Ethan — along with Luther (Ving Rhames), Benji (Simon Pegg) — must find the cores before the Apostles do. This takes them to France where they meet The White Widow (Vanessa Kirby) who plans to sell the cores to Lark. Meanwhile, August Walker (Henry Cavill) — a CIA assassin — is trying to prove his suspicions to Erica Sloane (Angela Bassett). That Hunt has gone rogue and is really Lark, while Ilsa (Rebecca Ferguson) is on the hunt for Lane.

Hunt is also the best spy character in the business. From HALO jumping to flying his own helicopter, there’s clearly nothing Cruise won’t do. A funny conversation at my wife’s work puts his abilities in perfect perspective. Someone mentioned the word “diabeetus” and long story short, the realization was made that Cruise is five years older here than Wilford Brimley was when he made Cocoon. Let that sink in.

It helps that Cruise has found the perfect director in McQuarrie. The man can direct an action scene as well, if not better, than most. And while McQuarrie’s screenplay may be a tad convoluted, and labyrinthine as you’d expect, it always makes sense and is infused with plenty of fun. The film also manages to pay homage/respect to each of the first five movies. I’m sure it features its fair share of green screen, but there’s so much stunt work on display it boggles the mind. Jaw-dropping.

Fallout is the Dark Knight of the Mission: Impossibles. And I’m not just saying that because of Lorne Balfe’s epic score or because one character gets half his face disfigured. Fallout lives up the hype and then some. It demands to be seen on the biggest screen possible to get the most out of the IMAX footage, but it works phenomenally on a regular screen too. Just when we think we’ve seen it all, Cruise and company accomplish the impossible and prove we ain’t seen nothin’ yet!