The Nutcracker and the Four Realms

Not the worst live-action Disney film of the year, but still not great. If you have the chance to see a live performance, that's the real ticket to go with. Made for youngster who don't know the ballet exists.

Rated PG for some mild peril. 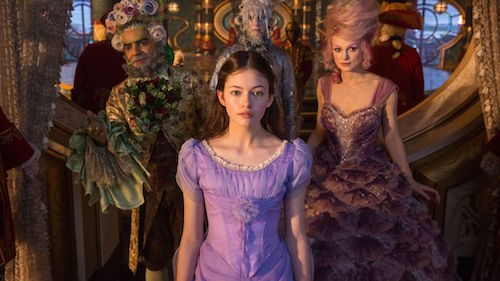 It’s been a rough year for Disney’s live-action films. First there was the disappointing mess A Wrinkle in Time, to the less-than-enchanting Christopher Robin. Now the holiday season sees The Nutcracker and the Four Realms released to try and infuse some Christmas magic. Unfortunately, this adaptation of E.T.A. Hoffmann’s short story, doesn’t have enough Disney magic to become an annual favorite. With two directors (Lasse Hallstrom and Joe Johnston) visions’ clearly at odds, it’s a good showcase for Mackenzie Foy. But never feels as overindulgent as it thinks it is and falls flat in the finale when it should be kicking into high gear.

It’s Christmas Even and Clara (Foy) is mourning the loss of her mother. Her father presents Clara and her siblings with their mother’s final gifts leaving Clara bewildered by a locked, egg-shaped box. The box was crafted by her godfather, Drosselmeyer (Morgan Freeman), who helps lead her to a parallel world to find the key. Here, she meets the Sugar Plum Fairy (Keira Knightley), Hawthorne (Eugenio Derbez), and Shiver (Richard E. Grant) — the rulers of the Land of Sweets, Flowers, and Snowflakes — who task Clara with saving their realms from Mother Ginger (Helen Mirren), the ruler of the Land of Amusement, who wants to conquer them all.

Johnston is best known for providing mostly entertaining action: The Rocketeer, Jumanji, Jurassic Park III, The Wolfman, Captain America: The First Avenger. Hallstrom for manipulative adult dramas: What’s Eating Gilbert Grape, The Cider House Rules, Chocolat, The Shipping News, a couple of Nicholas Sparks adaptations, The Hundred-Foot Journey, and A Dog’s Purpose. Whomever thought these two would be a good fit together, needs a career reassignment.

Having already been adapted numerous times, it would take something truly magical for The Nutcracker and the Four Realms to stand out — something not even the Mouse House can do apparently. The cast do what they can with Ashleigh Powell’s screenplay — Foy and Jayden Fowora-Knight as Phillip, a guard she befriends along the way, make an enjoyable pair — but the rest are left to act like they’ve walked out of a cartoon. And not in the enjoyable Amy Adams as Giselle in Enchanted kind of way.

Crammed with with bloated CGI and an ending that comes out of nowhere, this Nutcracker will please only the youngest audience members. Considering that’s who it’s clearly made for, I guess we shouldn’t be asking for too much more. As for the rest of us — and wiser parents — they should skip this altogether and head out to catch a live performance to see why the stage production of Nutcracker continues to be the holiday tradition it is.