Joyless and jokeless, the only smile I made wore off after the wiener dogs disappeared in the opening scene. It's all downhill from there! Made for no one but the absolute most forgiving of moviegoers.

Rated PG-13 for thematic elements, language and some sexuality. 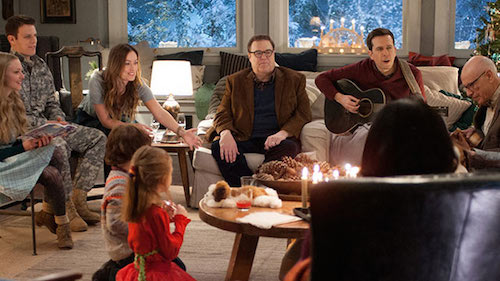 To say I love Christmas movies is a bit of an understatement. From standard classics like It’s a Wonderful Life and Miracle on 34th Street to what some kind consider the oddball choices of Gremlins and Die Hard. Love Actually happens to be one of my all-time favorite films. So it made my heart sink to learn that this season’s big holiday film, Love the Coopers,  had some not so encouraging names behind the scenes.

Director Jessie Rogers made a career out of writing/directing nothing but manipulative garbage — Corrina, Corrina, I Am Sam, Stepmom, Because I Said So. She also is credited with the story for another horrible holiday film: Fred Claus. Rogers was enough to discredited all hope. Then you factor in that it was written by Steven Rogers — Hope Floats, Stepmom, Kate & Leopold, P.S. I Love You — and I think you can guess what you’re getting yourself into with Love the Coopers.
There’s no love to be found anywhere in a hopelessly petty outing with one of cinemas most unlikeable families. You will not love anyone by the time the big stupid twist comes at the end. Let’s just say that Steve Martin — who narrates the entire movie — should be ashamed of himself for stooping to such a lowbrow film. And the rest of the cast should know better too.

Except for Diane Keaton. When’s the last time she did anything watchable? And So It Goes, The Big Wedding, Because I Said So, Something’s Gotta Give, Town & Country, Hanging Up, The Other Sister… as another recent holiday film would say, “good grief!”

The only one person watchable through the entire run time is Alan Arkin. But that man could read the phone book and make it enjoyable. It’s a shame that the opportunity to reunite Arkin with John Goodman results in so little amusement. They were so fantastic together in Argo, but here, Arkin is squandered to spewing unintentionally creepy monologues at Amanda Seyfried.

Then there’s the wasted opportunity of having Aunt May (Marisa Tomei) and Falcon (Anthony Mackie) stuck in the world’s longest police arrest with what appears to take an eternity before Tomei eventually jokes, “You can let me out here” only making the audience pray for the same luxury. The bottom line is that Love the Coopers is not just one of the worst holiday movies ever, it’s one of the worst films of the year and should be avoided at all costs.