– Three stars (out of four)
– Rated R for some language.
– Who’s going to like it: anyone intrigued by astonishing, little-known facts and Michael Moore fans 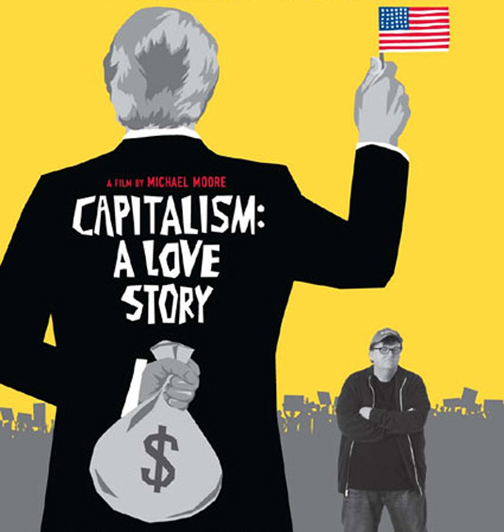 Everybody knows what capitalism is, but Michael Moore is here with Capitalism: A Love Story to more deeply define it and show us how it has become the dark power to strip the USA of its democracy. Before seeing it, I assumed it was going to be 100% B.S., but after reviewing the facts, I must eat my words.

Just to name a few, here are some of the things that I found informative and shocking: the details on the supposed “bailout,” “Dead Peasant” insurance policies and Plutonomy. Because of these examples and many others shown in the film, I fear not only for the state that our nation is in, but also the direction in which we are headed.

Being a controversial documentary, of course Capitalism is biased, but not nearly as much as his previous films. This one appears to be his first film that’s not directly tied in to one single political party – although it could have used more Republican voices.

Not being a fan of Michael Moore (considering he charged my school $40,000 for a one-hour speech) nor his highly biased films, I was not looking forward to screening Capitalism: A Love Story. Even after the screening I was disappointed at the film and how much mindless, arrogant Michael Moore material he included in it – in other words, how much of himself he included in it. But after a few days, I noticed that I was constantly telling people about the irrefutable and appalling facts, memos, testimonials and video clips he showed – things that I had never heard about. If you can push aside the asinine segments where Moore goes to Wall St. and asks for the bailout money back, shoveling through the many manipulative moments of people being evicted from their foreclosed homes, paying attention to the facts alone, then Capitalism is a film well-worth watching. 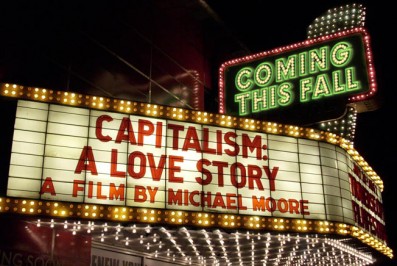