From Paris With Love

A big dumb action movie that's just too dumb to be fun. Made for fans of bad '80s “buddy movie” action flicks with terrible storylines. 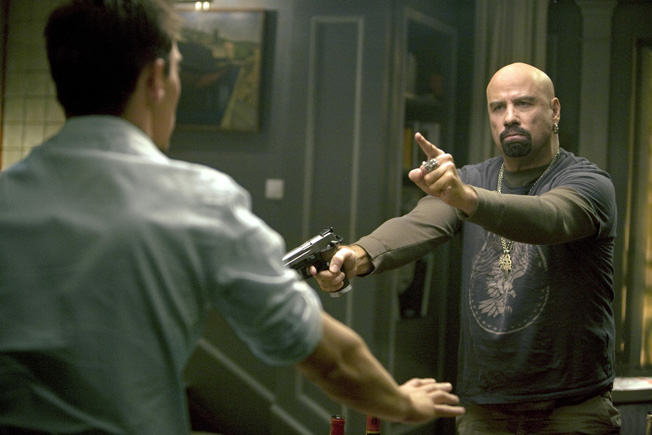 French filmmaker Luc Besson has produced some great movies, like The Fifth Element, The Professional and Taken, as well as some fun, over-the-top action flicks, like The Transporter franchise. I would typically say that he can do no harm, but last night I saw From Paris With Love – an embarrassment to have on his resumé.

Jonathan Rhys Meyers (Mission: Impossibe III, August Rush) plays James Reece, the assistant to the American ambassador in France. For years, Reece has been trying to get hired by the CIA as a spy. Finally, that time has come. His first assignment is to pick up his unknown “loose cannon” partner, Charlie Wax (John Travolta, Old Dogs) from the airport. From then on, Reece is dragged from gunfight to gunfight all over Paris in a 24-hour period – never told what his mission is. For the sake of American lives, I sure hope our spies are more knowledgeable than Reece.

Despite the inconsistencies in his performance, Travolta is the only actor who comes in and camps the hell out of his character. It’s obvious that he knows that From Paris With Love is a bad movie and that it is not trying to be anything more than a big dumb “shoot ‘em up” flick, so he goes overboard with his performance. Rhys Meyers, who comes in and plays a serious straight role in such an apologetically bad film, ends up looking likema fool for taking it seriously. Had Meyers gotten the memo and played along, From Paris With Love would have easily gotten one more star from me.

If you’re in the mood for a good action flick, I wouldn’t recommend From Paris With Love. You money is better spent on The Book Of Eli, a dollar movie or Redbox.