Has a lot to say about the current political climate and is hilarious AF! Made for Rogen/Theron fans and anyone looking for some huge laughs and a little romance.

Rated R for strong sexual content, language throughout and some drug use. 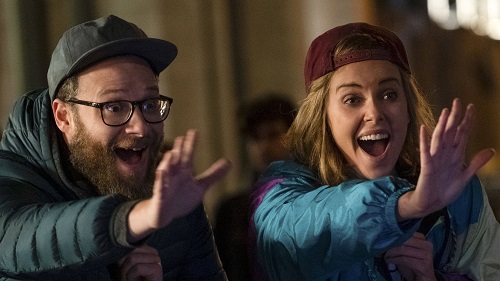 Director Jonathan Levine has come a long way from his Sundance slasher All the Boys Love Mandy Lane. Since then he’s managed to bring his delightful blend of comedy and drama through various genres. Drugs (The Wackness), cancer (50/50), zombies (Warm Bodies), Christmas (The Night Before), adventure (Snatched), and now we can add politics with Long Shot. Returning along with him is Seth Rogen for another sterling example of how to make a film that’s timely, heartfelt, raunchy, effortlessly charming, and above all, funny AF!

Fred Flarsky (Rogen) is a committed extreme journalist. So dedicated to the truth that we first meet him attending a White Supremacist meeting, nearly getting a white power tattoo before throwing himself out a window. Unfortunately, Fred’s paper just got bought by their worst enemy: Parker Wembley (Andy Serkis), an international media mogul who likes to cover up the truth spending time on tabloid topics. Fred quits and meets up with his best friend Lance (O’Shea Jackson Jr.), who swears he’s going to show Fred the night of his life.

While at a party, Fred runs into his old babysitter, Charlotte Field (Charlize Theron), who just happens to be the U.S. Secretary of State. Turns out, Charlotte has just been given backing to run for President by current President Chambers (Bob Odenkirk), who longs to return to his television roots. A Boyz II Men performance/fall down the stairs incident later, and Fred is swept up by Charlotte — much to her assistant Maggie’s (June Diane Raphael) chagrin — to be her new writer to punch up her poll ratings. And soon enough, the two begin a will they/won’t they relationship that only real life could possibly mirror.

There’s no denying the appeal of Rogen, and combined with the star power of Theron — in a hilarious turn — the two are one of the best on screen couples in years. The jokes fly by at a rapid pace with Rogen and Theron almost upstaged by Jackson and Raphael. The two are deadpan at its finest. Long Shot ticks off political topics with finesse, while managing to hit some well deserved Hollywood targets as well. Levine continues to prove he can do whatever he wants. It’s going to be interesting to see how long it takes before he starts repeating himself. In the meantime, Long Shot is another in a long line of crowd pleasers and one of the freshest surprises before the summer season kicks off.